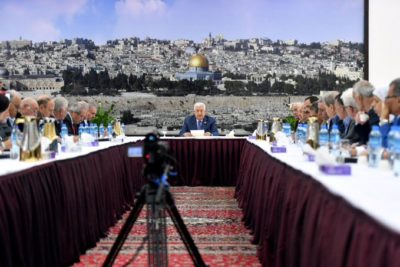 The President of the Palestinian Authority, Mahmoud Abbas, announced Thursday evening the suspension of all agreements and accords signed with Israel, citing the demolition this week of 70 Palestinian homes in Sur Baher, an area that is supposed to be under full Palestinian control according to the signed agreements.

Abbas also cited the pressure put on him to accede to the Kushner Plan, called by Kushner and Trump a so-called ‘deal of the century’, which would force the Palestinians to give up their right to self-determination on their own land.

In his statement, Abbas also called for reconciliation between the Palestinian political factions to form a united front against the Israeli military occupation.

He said the suspension will take effect by Friday.

“We will not succumb to the dictates and the imposing of a fait accompli on the ground with brute force, specifically in Jerusalem. All that the (Israeli) occupation state is doing is illegal.

“Our hands have been and are still extended to a just, comprehensive and lasting peace. But this does not mean that we accept the status quo or surrender to the measures of the occupation.

“We will not surrender and we will not coexist with the occupation, nor will we accept the ‘deal of the century.’ Palestine and Jerusalem are not for sale or bargain. They are not a real estate deal in a real estate company….no matter how much time it takes, the repugnant occupation is going to be defeated and our future state will be independent.”

He called for the implementation of th Egyptian-mediated Cairo Agreement of 2017 between the Palestinian factions, including Hamas, saying, “My hand is extended for reconciliation and it is time to get more serious”.

The statement came after Israeli military forces demolished 11 buildings, including a nine-story apartment building, and rendered 70 Palestinian families homeless on Monday and Tuesday of this week in Wadi al-Hummus, in the Sur Baher township.

Israel claimed that the buildings were too close to the Israeli-constructed Wall, which severs Jerusalem from West Bank.

The International Court of Justice (ICJ) ruled in 2004 that the barrier violated international law, but Israeli forces continued its construction throughout the West Bank.