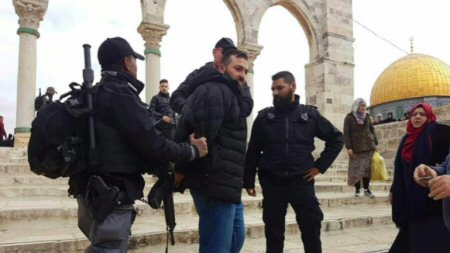 The following day after noon prayers, Palestinians protested the closure of Bab al-Rahmah Gate. Hundreds of worshippers prayed in front of the gate and some attempted to force it open.

Along with assaulting a group of Palestinian men, Israeli police arrested five Palestinian worshippers and one member of the Islamic Waqf, according to the Wadi Hilweh Information Center.

Israeli forces then closed all of the gates leading to al-Aqsa Mosque for half an hour and evacuated the compound by force. At the same time, Israeli police facilitated the entry of around 70 Jewish Israeli settlers through Bab al-Magharib, reports Middle East Eye.