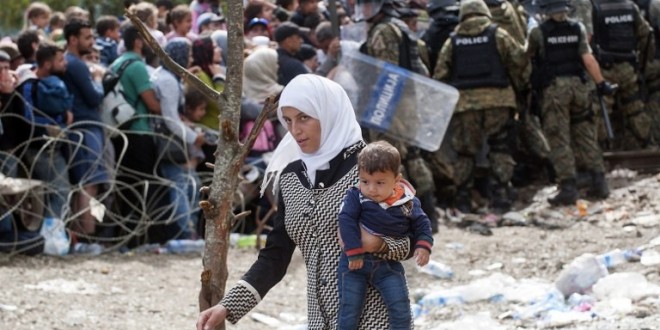 Hundreds of Palestinian refugees fleeing war-torn Syria have been stranded in Greece after local authorities sealed off all passageways to neighboring countries, a rights group reported Friday.

According to the Action Group for Palestinians in Syria, hundreds of Palestinian refugees have been stuck near border-areas with Europe after they were forced to leave refugee camps, due to the dire circumstances and poor hygiene.

The Action Group attributed the tragic situation to the oppressive policies pursued by the European Union as regards refugees on Greek borders.

The group further sounded the alarm over the tragic situation endured by Palestinian refugees in war-torn Syria, where the Khan al-Sheih refugee camp in the Damascene suburbs has been the permanent target of strikes by the Syrian regime army.

Dozens of civilians were killed and others were left wounded as a result, according to the PNN.

The situation has gone worse after the regime army blocked all access-roads into Damascus. A blockade imposed by the Syrian army for 1,116 days took away the lives of at least 187 civilians.

The camp has also seen a power cut since 1,177 days and a water blackout since 666 days. The Syrian army has been preventing refugees at the al-Subeina camp from returning to their homes since 969 days running. Meanwhile, 70% of civilian homes in the Deraa refugee camp have been reduced to rubble.

A water blackout has been rocking the camp since 820 days.