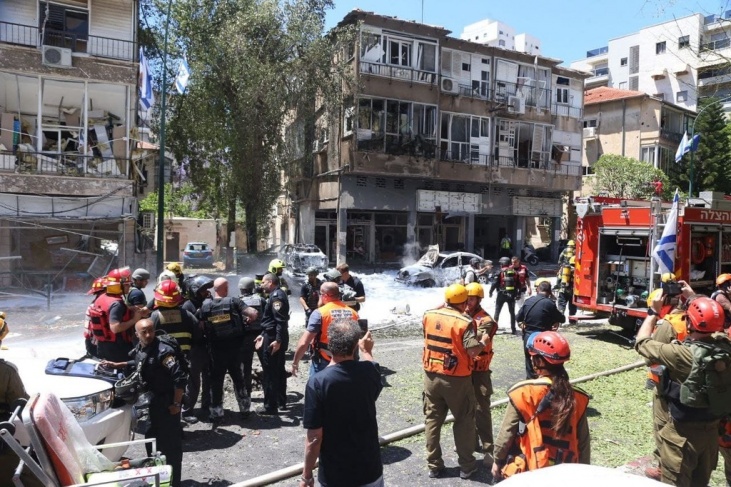 In the midst of a deadly night in Gaza in which Israeli bombardment killed at least 34 Palestinians in a single night of bombing, Palestinian resistance fighters retaliated in the early morning hours with the launch of rockets toward Israel, killing one Israeli in Ramat Gan. The deceased is a 50-year old man who has not yet been identified

Medic Lior Marmelstein told reporters with the Israeli outlet Yedioth Ahranoth, “We went from door to door in large numbers and in one apartment we located an unconscious man in his 50s. After trying to revive him, he was pronounced dead.”

According to Israeli media, the rockets fired in the early morning hours of Saturday hit points in Tel Aviv, Jaffa, Rishon Lezion, Yavne, Ramat Gan, Bat Yam, Holon, Petah Tikva and Ramat HaSharon as well as in the West Bank settlement of Eli, north of Jerusalem, causing no casualties. A rocket also hit the Palestinian city of Taybeh, causing damage to property.

Update: Total of 6 Israelis Killed by Palestinian Rockets Since Monday

Despite calls by Palestinian leadership for a ceasefire, Israeli military forces have continued their escalation in Gaza, the West Bank and inside Israel, with the Palestinian resistance responding with indiscriminate rocket fire that has resulted in the deaths of six Israeli civilians.

In the same time period, over a hundred Palestinians have been killed, nearly a third of them children, and millions of dollars in damage has been done by Israeli airstrikes and bombardment of the Gaza Strip.

The Israeli civilians killed by Palestinian rocket fire have been identified as:

One of the rockets fired by the Palestinian resistance on Wednesday hit an Israeli oil pipeline near Ashkelon, causing a large fire.

After Israeli forces pounded the Gaza Strip with missiles for two straight days, killing at least 35 Palestinians including 12 children, and refusing to respond to Palestinian demands for a withdrawal and a ceasefire, Palestinian resistance fighters in the Gaza Strip launched a barrage of rockets across the border into Israel, killing five Israelis, including a teenage girl and her father.

One of those killed has been identified as Soumya Santosh, 31, from Kerala, India, who worked as a housemaid for an Israeli household in Ashkelon for the past seven years.

Rocket sirens sounded throughout the night in Israel’s southern towns and cities, and the Ben Gurion Airport in Tel Aviv was briefly shut down. 26 Israelis were reportedly injured – most with minor injuries.

The rockets were fired in the early morning hours on Wednesday, as Gaza’s hospitals were besieged with hundreds of wounded Palestinians, many of them children, who suffered traumatic and severe injuries from the numerous Israeli missile strikes into crowded Palestinian neighborhoods throughout Gaza on Monday and Tuesday.

In addition to bombing Palestinian neighborhoods for two straight days, the Israeli military called up 5,000 reservists and had them stationed at the border with Gaza to threaten the Gaza Strip with a possible ground invasion.

Israelis in the cities of Sderot, Holon and Ashkelon rushed to shelters and many stayed there overnight to try to avoid the impact of Palestinian resistance rocket fire.

Israeli media reported that at 8:45 A.M. on Wednesday, Israeli forces intercepted a drone crossing from Gaza into Israel.

The teen girl and her father who were killed by a Palestinian resistance rocket, Nadine and Khalil Awaad, were themselves Palestinian – with Israeli citizenship. But their town, Dhamas near Lod, being a mainly Palestinian village, was never provided bomb shelters like the Jewish Israeli towns were provided by the government. In fact, their village, Dhamas, was not recognized by Israeli authorities, and so lacks basic services and is under threat of demolition by the Israeli government. One of their relatives, Ismail Arafat, lives there as well and has been part of leading the struggle for recognition of the village.

The Israeli news agency Ha’aretz quoted Ismail Arafat as saying, “We have nowhere to go. We don’t have a bomb shelter here for everyone. For the Thai [migrant] workers they built shelters, but we were not allowed because we are not humans. Nadine and Khalil were in the middle of breakfast before fasting [for the Muslim holy month of Ramadan]. It seems that he opened the door and that’s how he was hit.”