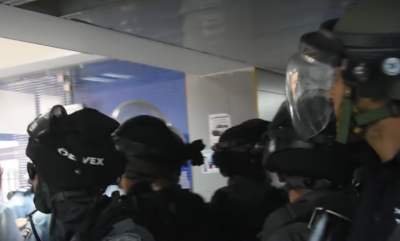 The Israeli military invaded the Al-Makassed Hospital in East Jerusalem on Friday, in direct violation of international law and the Fourth Geneva Convention, which forbids military forces from invading hospitals and medical centers.

The Israeli troops had invaded the town of al-Tur in East Jerusalem and attacked the Palestinian civilians of the town. Local youth responded by throwing stones at the invading army, and some youth burned a police car.

Some Palestinians were injured in the Israeli attack, and were taken to the al-Makassed Hospital. The Israeli soldiers pursued the injured Palestinians into the hospital grounds, where they reportedly fired sound bombs.

Patients at the hospital were impacted by the sound bombs. Al-Makassed is a major hospital center in East Jerusalem.

Israeli forces have, on numerous occasions in the past, invaded the hospital in pursuit of Palestinian civilians that they claim are ‘wanted’. This has included Israeli special forces dressing as women to enter the hospital, then searching patient rooms and throwing off their costumes and arresting a patient.

The invasion of the hospital grounds came soon after the al-Makassed Hospital administration announced their willingness to accept patients from the Gaza Strip, where hospitals are overwhelmed with casualties from the ongoing Israeli bombing.

In addition to killing nearly 150 Palestinians in Gaza in 4 days, the Israeli bombardment has resulted in over 600 injuries, many of them serious.

Hospitals in Gaza are ill-equipped to handle the influx of patients, as they are lacking in essential medicines and equipment due to the ongoing Israeli siege of Gaza.

The al-Makassed hospital administration had confirmed its readiness to receive serious cases of those injured in the Israeli attacks on the Gaza Strip, to reduce pressure on hospitals there, in coordination with the Ministry of Health and the authorities in the Palestinian government.

The administration confirmed that it worked to prepare places to receive the wounded, and prepared various scenarios, including the possibility of sending a medical team to the Gaza Strip to treat the wounded there, in case they could not reach Jerusalem due to the actions of the Israeli authorities.