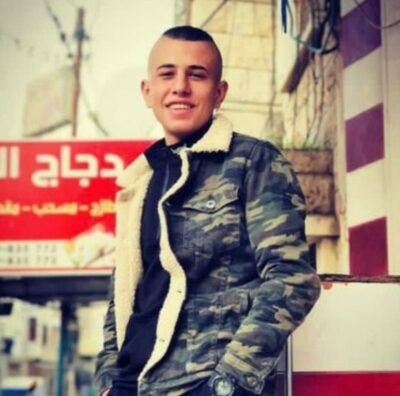 The Palestinian Health Ministry confirmed Monday morning that a Palestinian teenage boy has died from serious wounds he suffered Sunday, after Israeli soldiers shot him in Jenin city, in the northern part of the occupied West Bank.

The Health Ministry said the teen, Mohammad Hussein Zakarna, 17, was shot in the back by undercover Israeli soldiers who infiltrated the Industrial Zone in Jenin and fired many live rounds at a Palestinian car.

Medical sources said Mohammad was shot with an expanding bullet in the back, and its fragments tore through his chest area.

Zakarna was from the Eastern Neighborhood of Jenin city; the Israeli soldiers and the undercover officers also injured several Palestinians during the area’s invasion.

He was shot and seriously injured when the undercover officers ambushed a Palestinian car and fired several live rounds at it. Mohammad died from his serious wounds at the al-Razi hospital in Jenin.

His funeral ceremony was held in Jenin shortly after his death and was attended by hundreds of Palestinians.

His death brings the number of Palestinians killed by Israeli soldiers to four, after the army three Palestinians, including two women in the West Bank, Sunday.