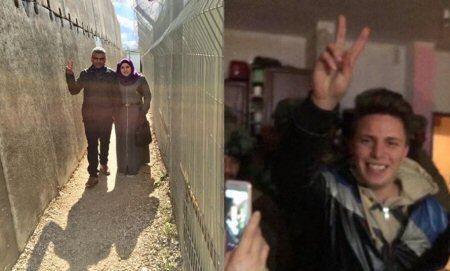 Abdul-Khalik Burnat, 17, the son of Palestinian activist Iyad Burnat, was brought before the Ofer Israeli military court on 28 January 2018. Iyad Burnat posted on Facebook describing Abdul-Khalik’s hearing and the experience of attending the court.

“I attended the ‘hearing’ today, fifty days after my son’s abduction, and it was a long day of deliberate humiliations and insults. My wife and I went through several gates and numerous humiliating body searches, and then we arrived at a yard where the detainees’ families wait to attend their children’s ‘hearings’. After two hours of waiting, we entered the ‘court’, and what a court it is! A court filled with soldiers wearing military uniforms and a child in a cage, his feet in chains, wearing a brown uniform and a broad smile. A smile that says, I am strong! A smile to greet his mother and father in an atmosphere filled with animosity and hatred. One of the soldiers told us to sit in an area reserved for families of the detainees and not to speak,” Burnat wrote.

The military prosecution’s charges against Abdul-Khalik were read out, including stone-throwing (the most common charge issued against the approximately 700 Palestinian children brought before Israeli military courts each year), as well as allegations that this stone-throwing caused “severe damage to the Wall,” the eight-meter high concrete separation wall condemned by the International Court of Justice. Abdul-Khalik was also accused of presenting a “threat to security” and causing damage to the Israeli occupation state. “. I never felt that I was in a courthouse; rather, it was the scene of a great injustice, a part of the Zionist Occupation,” Burnat wrote.

Abdul-Khalik’s next hearing before the military court was scheduled for 11 February.

Also on 28 January, Mohammed Bilal Tamimi, 19, was brought before the military court after 17 days of interrogation. Mohammed is one of the cousins of Ahed Tamimi who has been targeted for arrest and interrogation as part of the ongoing collective punishment directed against the family.

Manal Tamimi, the teen’s mother, said on Facebook that the military court judge did not yet rule on whether his interrogation should be extended as requested by the Shabak, the notorious Israeli intelligence service, and that a ruling would be made within the coming days.

“Mohammed looks very tired, his face turned to yellow and he lost around 7 kilos or more of his weight, he don’t have enough food or sleep during the past 17 days and he went through so many interrogation sessions days and nights , despite this he still very strong and they couldn’t break him,” Tamimi wrote about her son.