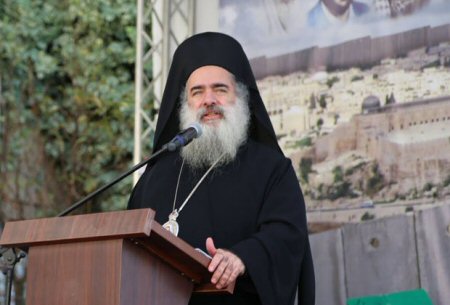 Archbishop of the Greek Orthodox Patriarchate in Jerusalem has said that all conspiracies against Jerusalem will fail, stressing that US policy regarding the eMiddle East is “ugly.”

“The history, heritage, identity, holy sites and endowments of Jerusalem are targeted,” said Archbishop Atalla Hanna. He added that there is a plan to “uproot the city from its Palestinian body.”

The church leader reiterated that all such conspiracies will fail, according to Days of Palestine.

Archbishop Hanna made his comments during a reception for a Brazilian academic delegation, including university professors, who arrived in the occupied territories on a visit in solidarity with the Palestinian people. The delegation will visit a number of Palestinian universities and academic institutions.

“Jerusalem is not silent and does not consist of only the holy sites, of which we are proud,” Hanna told the delegation. “It also the human being who is fighting for his freedom and to regain his rights, hopes and national aspirations.”

In this respect, he stressed, the US decision regarding Jerusalem “completely ignores” the Palestinians in the city, “as if we are not here.”

“We are here,” the outspoken critic of the Israeli occupation pointed out. “We remain here. We are staying and we will not concede our city whatever the conspiracies against us are and whatever the plans are to uproot it from the Palestinian body and distort its features.”

Archbishop Hanna concluded by insisting that the Palestinians of Jerusalem were not surprised by the latest US position.

“It is hostile to our people. The American policy has been this way – against our people and the Arab region — for too long. What happened recently with Trump simply revealed the real face of American policy towards the region.”