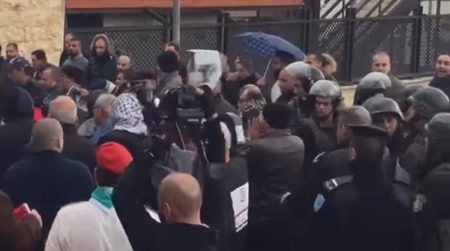 Palestinian Christians from around the occupied West Bank, East Jerusalem and Israel came out in harsh opposition, Saturday, to a visit by Greek Orthodox Church Patriarch of Jerusalem, Theophilos III, to the southern occupied West Bank city of Bethlehem.

Theophilos III, along with several other religious and political figures, were visiting Bethlehem as part of celebrations for Greek Orthodox Christmas Eve.

Despite an intense presence of Palestinian security forces who attempted to open roads near Bethlehem’s Manger Square, for the patriarch’s car, angry protesters swarmed around the procession, holding signs, Palestinian flags, and chanting slogans against Theophilus III.

According to Ma’an News Agency,  some people threw stones and smashed windows of the car that the patriarch was riding in as they demanded he be stripped of his titles and removed from the church.

Theophilos III is accused of orchestrating the sale of more than 500 dunams (123.5 acres) of Palestinian land belonging to the Arab Orthodox Church in Jerusalem to Israelis belonging to Zionist and settler groups.

The protest was not the first of its kind in Bethlehem — visits by Theophilus III to the biblical town have been boycotted in the past.

On Saturday, heads of the municipalities of Bethlehem, Beit Jala and Beit Sahour boycotted the reception, along with several religious organizations affiliated with the Greek Orthodox Church.

The church has been accused numerous times, over the years, of selling its leasing rights over land in Jerusalem to Jewish Israeli investors, with Israeli financial newspaper Calcalist revealing late last month that the Orthodox Patriarchate had sold the rights to 500 dunams, in August 2016, for 114 million shekels ($32 million), a move to be effective in 2050, when the Jewish National Fund’s lease of the land is set to expire.

Detractors have accused the patriarchate of contributing to Israeli plans to “Judaize” Jerusalem by selling or leasing off large amounts of land to Israeli authorities and business people, betraying the church’s responsibility to protect Palestinian lands that were handed under its care during the Ottoman period.

In 2015, a patriarchate spokesperson denied that the church was selling off lands in Jerusalem — a claim that did not convince many members of the faith, at the time.