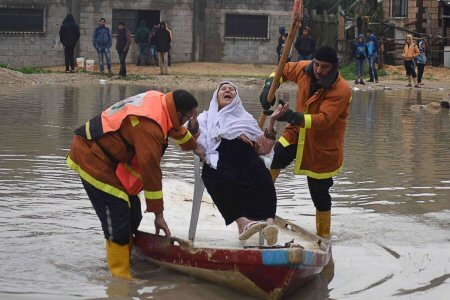 Dozens of makeshift houses in the Gaza Strip have been flooded since Thursday night, due to heavy rains amid an extreme cold wave hitting the region.

Rainfall has poured into houses sheltering dozens of Palestinian families in several areas across the blockaded coastal enclave.

Using fishing boats, civil defense services have managed to rescue residents from the flooded houses and move them to safe places.

Fearing the floods, dozens of Palestinian families have already left their homes in several parts of the Strip, according to Days of Palestine.

Residents of flood-prone areas vacated their homes after local authorities warned that such areas were in danger of being flooded with rainwater and sewage.

Local authorities have said that the cold spell could cause a “humanitarian disaster,” as the Strip’s war-battered infrastructure cannot not withstand heavy rainfall.

Already undeveloped as a result of Israeli 11-year blockade, Gaza’s rickety infrastructure sustained further damage during the 51-day Israeli military onslaught in July and August of 2014.

Over 2,160 Palestinians were killed – and some 11,000 injured – during the Israeli seven-week war, which was the third major Israeli offensive on Gaza in a six-year span.

Israeli media has warned that unprecedented deterioration of living conditions in the region may lead to the outbreak of another war.

This, the website said, may in turn hinder Palestinian reconciliation, despite the fact that neither Hamas nor Israel want this escalation.

Meanwhile, Israeli website Wallah has reported that, at a time when Israel is looking for the party which fired mortar shells on Wednesday, the residents of the Gaza Strip are living in a state of desperation and frustration due to the difficult economic conditions.

These conditions have intensified since the supposed “reconciliation deal” was put together in Cairo, in part because the Palestinian Authority in Ramallah has refused to lift the sanctions that it has imposed on Gaza for more than eight months.

“Three mortar missiles were fired on Wednesday in open spaces in Gaza,” said Wallah’s report. “You don’t need to be an intelligence officer to understand that there are parties in Gaza that want a military escalation and war against Israel,” it added.

It continued: “It is not important who they are; what is important is why? The answer is very simple: the humanitarian situation is increasingly deteriorating and war does not seem to be a bad option in their opinion.” Israel, the PA and Egypt had made Hamas’ giving up control of Gaza the main condition to lift the 11-year-old siege. When Hamas gave up, they tightened the siege and people became unable to survive.

The two main Palestinian factions, Hamas and Fateh, are behind the internal division but, together, they signed a mutual reconciliation agreement brokered by Egypt on 12 October of last year. Palestinians in Gaza celebrated the deal, which was announced as the end of the 10-year Israeli, Palestinian Authority and Egyptian siege.

As a goodwill gesture, Hamas dismantled its administrative committee, which had superseded the Palestinian government in the Gaza Strip run by the movement. The Palestinian Authority (PA) in Ramallah, dominated by Fateh, announced that it would take up its responsibilities in Gaza immediately and lift the punitive measures imposed against the enclave by its leader Mahmoud Abbas, which included electricity cuts, a public sector salary freeze and an end to sending medicines and approving referrals for medical treatment elsewhere.