Orthodox Leaders Arrive in Bethlehem for Beginning of Christmas Celebration 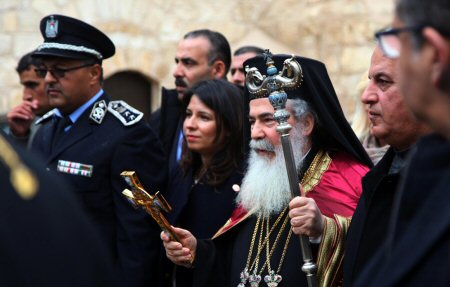 Orthodox churches celebrating Christmas according to the Eastern calendar completed, on Saturday, their arrival at the Church of Nativity in Bethlehem, marking the start of Christmas celebrations.

Theophilos, head of the largest orthodox community in Palestine, headed a procession that started from the Greek Orthodox Patriarchate in Jerusalem’s Old City and arrived at Bethlehem’s Manger Square where he was received by Palestinian officials, including the governor of Bethlehem Jibrin Bakri and Minister of Tourism Rola Mayaya among others.

Theophilos will lead the Midnight Mass at the Church of Nativity, which will be attended by PA President Mahmoud Abbas, according to WAFA.