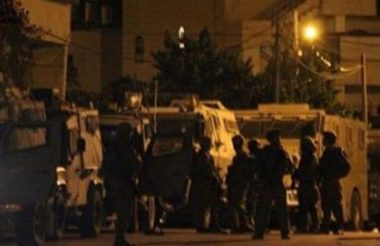 Israeli soldiers abducted, earlier Sunday, two Palestinians in Hebron and Jerusalem, after the soldiers invaded and searched many homes, and interrogated several Palestinians.

In Hebron, in the southern part of the occupied West Bank, the soldiers invaded the al-‘Arroub refugee camp, abducted Safi Ayman at-Teety, 22, and took him to an unknown destination.

The soldiers also invaded the family home of Khaled Jawabra, who was killed by the army on November 26, 2015, and violently searched the property.

In addition, the soldiers invaded many homes in Hebron city, including the home of detainee Nidal Shehada, stormed homes in Yatta town, south of Hebron, and summoned Mohannad Mousa for interrogation in Etzion military base and security center, north of Hebron.

In occupied Jerusalem, a Palestinian teen, identified as Adham Ja’abees, 18, turned himself in to the army to serve a ten-month imprisonment sentence.

Ja’abees, from Jabal al-Mokabber neighborhood, southeast of Jerusalem, was under house arrest, and will be serving his term in Ramla prison.