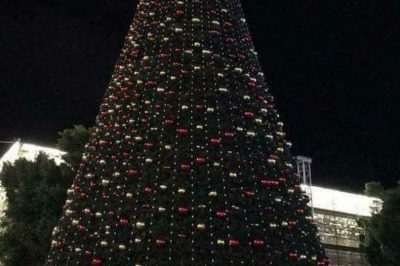 Just days after the Christmas tree lighting in the birthplace of Jesus, Bethlehem, the lights on the giant Christmas tree were turned off at the request of local officials, to protest the US claim that Jerusalem is the capital of Israel.

The ‘Christmas Blackout’ protest also included the Christmas tree in Beit Sahour and the one in Ramallah set up next to the burial site of the late Palestinian President Yasser Arafat.

This was a decision made by local officials, whose leadership is majority Christian.

Palestinian Christian leaders have joined with Muslim leaders to condemn the U.S. President’s statement about Jerusalem, which was an unprecedented policy shift by a U.S. administration.

The spokesperson for the city of Bethlehem, Fady Ghattas, “The Christmas tree was switched off on the order of the mayor today in protest at Trump’s decision.”

The city spokesman said they may keep the blackout in place through Christmas. The annual month-long Christmas celebration was subdued in the past decade due to the Israeli occupation. But the last couple of years have been more festive, and this year was the largest Christmas tree lighting since before the second intifada began in 2000.

Protesters marched through the streets of Bethlehem Wednesday after Trump made his speech declaring Jerusalem to be the capital of Israel, effectively annulling the rights of the hundreds of thousands of Palestinians that live in the city of Jerusalem, and denying the rights of Christians and Muslims to the city.