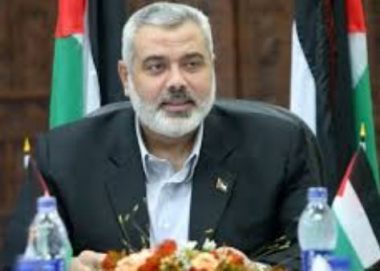 In a televised speech from his home in the ash-Shati refugee camp in Gaza, the head of the Political Bureau of Hamas movement, Ismail Haniyya, strongly denounced the American decision to recognize Jerusalem as the capital of Israel and to move the embassy to the occupied city, and called for a new Intifada in every part of occupied Palestine.

He added that armed resistance factions in Palestine have received clear orders to be ready to counter this strategic threat, which endangers occupied Jerusalem and its future.

“Hamas movement is acting in a powerful manner for the launch of a new Intifada against the Israeli occupation; we need to formulate new strategies and polices to counter the threat and conspiracy against Jerusalem, against Palestine,” he said.

“The blindfolded and outrageous support of the U.S. Administration to this illegal and immoral occupation is very clear and has always been clear, without ambiguity. It is an unmasked support to occupation, oppression and injustice,” Haniyya added, “Jerusalem is ours, there is no West or East; it is the united Arab and Islamic capital of the state of Palestine, a state from the river to the sea.”

The Hamas leader also called for strong unity among all Palestinian factions, and “for a unified stance to counter this oppression and aggression.”

He also called for revoking the Oslo agreements, and for an urgent meeting between all factions to discuss unified reactions, and strategies.

Haniyya called on the Palestinian government “to support the armed resistance factions, to continue the struggle against the Israeli occupation,” in response to the American decision, to move the U.S. embassy to occupied Jerusalem, and the U.S. claim that the city is the capital of Israel.

It is worth mentioning that Haniyya also said that, despite America’s illegal policies and its support to the ongoing illegal Israeli occupation of Palestine, the Palestinian resistance is only focused against the occupation, and called on all Arab and Islamic countries to formulate a unified response to the American decision, which he described as “a declaration of war against the Palestinian people in its holy city.”