Palestinian Woman And Her Daughter Denied Entry Into Al-Aqsa Mosque 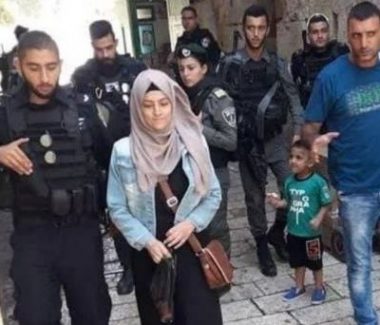 The Israeli police detained, on Sunday evening, a Palestinian woman and her daughter, and handed them orders preventing them from entering the Al-Aqsa Mosque, in occupied Jerusalem.

The police summoned Khadija ‘Khweiss for interrogation, and handed her an order preventing her from entering the mosque and its compound for six months.

The soldiers also handed her daughter, Shifa’ Abu Ghalia, an order preventing her from entering the mosque for two weeks. Shifa’ was detained by the police, earlier Sunday, as she was leaving the holy site.

It is worth mentioning that Khadija, and several Palestinian women from occupied Jerusalem, have been repeatedly detained and interrogated by the soldiers and the police, for protesting ongoing invasions into the holy site, and repeated provocative tours by colonialist settlers accompanied by armed officers into Al-Aqsa.