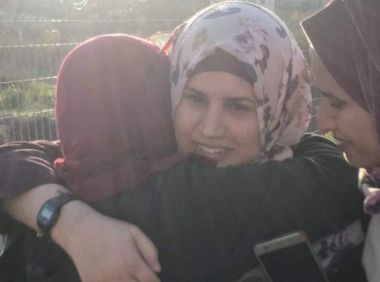 Hundreds of Palestinians held, Friday, the funeral procession of a woman who was killed by Israeli army fire on June 12th of this year, at the Qalandia Terminal, north of occupied Jerusalem, in the West Bank.

The woman, identified as Ibtisam Ka’abna, 28, was shot by the soldiers and was left bleeding without any medical treatment until she succumbed to her wounds before the soldiers took her corpse away. On Friday, her corpse was moved to the military roadblock at the southern entrance of Jericho before Palestinian medics took it to the governmental hospital in the city.

Her family and hundreds of residents held the prayers and funeral ceremony at the mosque in Aqbat Jaber refugee camp, in Jericho, before she was buried in the local graveyard.

Ibtisam was a former political prisoner and a mother of one child. On August 27th, 2015, she was abducted by the army and was later sentenced to 18 months in prison.

After shooting her, the Israeli army claimed that the woman “was yielding a knife”, while the “Times of Israel” alleged she “ran towards the soldiers while brandishing a knife.” No soldiers were hurt in the alleged attack.