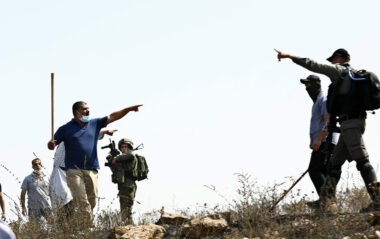 Dozens of Palestinians in Qalqilia governorate, in the northern part of the occupied West Bank, managed to intercept and foil attacks by groups of illegal fanatic Israeli colonists on various intersections and roads, Israeli soldiers abducted two Palestinians.

Spokesperson of Fateh Movement in Qalqilia, Morad Eshteiwi, said the Palestinians, from the local Popular Resistance nonviolent committees, intercepted the colonists, who gathered at main junctions and intersections.

Eshteiwi added that the colonists were trying to attack residents, homes, cars, and other property, when dozens of locals intercepted and repelled their attacks, forcing them to leave.

Israeli soldiers arrived at the scenes of the incidents and started firing gas bombs and concussion grenades at the Palestinians, causing many to suffer the effects of teargas inhalation.

Eshteiwi said the soldiers abducted a Palestinian, identified as Mahdi at-Tayyeb and Khairi Hannoun, 61, before taking them to an unknown destination, in addition to briefly detaining Bayan Tayyeb, and two of his sons.

The soldiers also attacked the Palestinians in the Fondoq village, east of Qalqilia, near Qalqilia, and fired gas bombs at them, causing dozens to suffer the effects of teargas inhalation.

In related news, the soldiers invaded Silwad town, east of the central West Bank city of Ramallah, leading to protests.