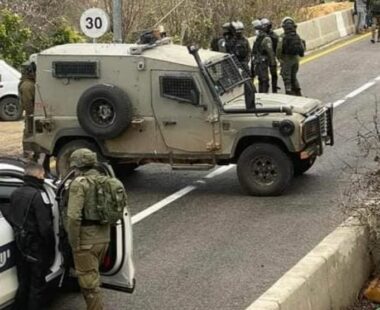 On Friday, Palestinian residents intercepted and managed to stop an attack by groups of illegal Israeli colonists, who tried to invaded Khan al-Lubban archeological site, on the main Ramallah-Nablus road, south of the al-Lubban ash-Sharqiya village, south of the northern West Bank city of Nablus.

Media sources said the colonists closed roads in the area, and were attempting to invade the site before the local intercepted them.

They added that Israeli soldiers accompanied the colonists, and fired many gas bombs and concussion grenades at the Palestinians.

It is worth mentioning that Khan al-Lubban is subject to constant Israeli attacks, carried out by soldiers and colonialist settlers, especially on Fridays.

The colonists also frequently attack the Palestinians in the area, and constantly attempt to prevent them from entering the site.

Also on Friday, dozens of residents in Qalqilia governorate, in the northern part of the occupied West Bank, managed to intercept and foil attacks by groups of illegal fanatic Israeli colonists on various intersections and roads, before Israeli soldiers abduct two Palestinians.