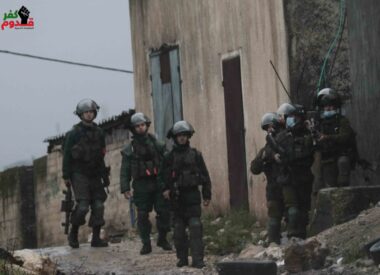 The Popular Committee against the Annexation Wall and Colonies in Kufur Qaddoum said the Palestinians marched from the village, chanting against the illegal Israeli occupation, ongoing colonialist activities, and escalating violations.

It added that the soldiers resorted to the excessive use of force by firing many rubber-coated steel bullets, sponge-tipped bullets, gas bombs, and concussion grenades.

Three Palestinians were shot with rubber-coated steel bullets, seven were shot with the sponge-tipped bullets and dozens suffered the effects of teargas inhalation.

Many Palestinian youngsters hurled stones at the soldiers who invaded the village and attacked the procession.

Furthermore, the soldiers invaded and ransacked several homes, in addition to occupying the rooftop of a home, owned by Adnan Abdul-Mahdi, to use it as a military tower and a firing posts. The soldiers also smashed the rear window of Adnan’s Taxi, in addition to firing gas bombs direct at homes.

During the Israeli invasion, a Palestinian protester managed to throw a gas bomb at the soldiers, apparently after it fell from one of them.

Kufur Qaddoum holds weekly processions, every Friday and Saturday, protesting the illegal Israeli Annexation Wall and colonies, in addition to the continued close to the town’s main road since the year 2003.

The road is no longer accessible to the Palestinians and is exclusively used by the colonists, driving to and from Kedumim illegal colony, which was built on stolen Palestinian lands.