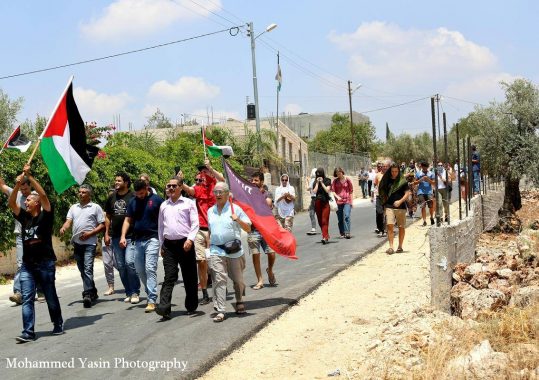 Dozens of Palestinians, Israeli and international peace activist participated, Friday, in the weekly nonviolent protest against the illegal Israeli Annexation Wall and colonies, in the village of Bil’in, west of the central West Bank city of Ramallah.

Members of the Italian Parliament and activists from The Netherlands visited the village and participated in the weekly nonviolent protest.

The Popular Committee against the Wall and Colonies in Bil’in has reported that the protesters raised Palestinian flags and marched chanting for national unity, steadfastness, the liberation of Palestine and the release of all political prisoners.

The committee added that Israeli soldiers blocked the path of the protest, but did not assault the protesters or kidnap any of them, due to extensive present of international delegates, including the Italian Members of Parliament.

The visiting delegates were welcomed by Bassem Mansour, the head of Bil’in Village Council, in addition to Abdullah Abu Rahma, Eyad Burnat and Mohammad al-Khatib, of the Popular Committee against the Wall.

The visiting officials toured in Palestinian lands and orchards, close to the Annexation Wall, and listened to presentations about the ongoing struggle, and the steadfastness of Bil’in through its popular, nonviolent struggle, against the Wall over the last eleven years.