Paramilitary Israeli Colonizers Injure A Man And His Son, Damage Cars, Near Nablus 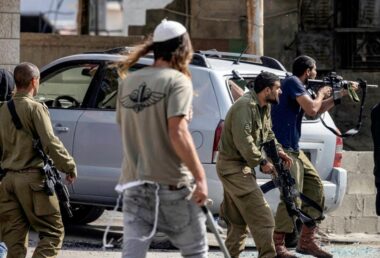 On Friday evening, illegal paramilitary Israeli colonizers injured a Palestinian man and his son and caused damage to homes and two cars in Madama and Burin villages, south of Nablus, in the northern part of the occupied West Bank.

He added that dozens of Palestinians intercepted the attack and forced the colonizers to leave before the Israeli assailants fired a few live rounds while retreating from the village.

Furthermore, the paramilitary colonizers assaulted and injured Emad Ziyada and his son Ahmad in Madama village.

The colonizers invaded the southern area of Madama and caused serious damage to two cars owned by Hatem and his brother Mashhour Al-Qit, and shattered some windows of their homes.