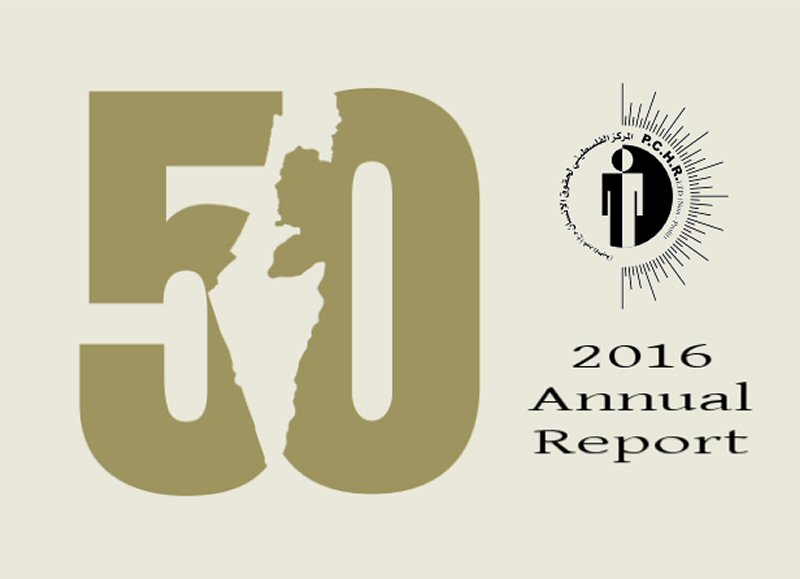 The Palestinian Centre for Human Rights (PCHR) has published its annual report for the year of 2016. A fully detailed PDF version of the report can be downloaded by clicking here.

The Centre was established in 1995 by a group of Palestinian lawyers and human rights activists in order to:

• Protect human rights and promote the rule of law in accordance with international standards.
• Create and develop democratic institutions and an active civil society, while promoting
democratic culture within Palestinian society.
• Support all the efforts aimed at enabling the Palestinian people to exercise its inalienable
rights in regard to self-determination and independence in accordance with international law
and UN resolutions.

The work of the Centre is conducted through documentation and investigation of human rights violations,
provision of legal aid and counseling for both individuals and groups, and preparation of research articles
relevant to such issues as the human rights situation and the rule of law. The Centre also provides comments
on Palestinian Draft Laws and urges the adoption of legislation that incorporates international human rights
standards and basic democratic principles. To achieve its goals, the Centre has recruited a committed staff of
well-known human rights lawyers and activists.

The Philosophy of the Centre’s Work

The Centre determined after a thorough legal assessment of the peace accords signed by the PLO and
the Israeli government that the occupation would continue both physically and legally. According to
these agreements, Israel has redeployed its forces inside the West Bank and the Gaza Strip, while Israeli
settlements and military installations maintain their presence in Palestinian territory. The major legal
aspects of the Israeli occupation remain in place. Israeli military orders that safeguard Israeli control over
the Palestinian people and their land remain valid in accordance with the peace agreement. The Israeli
military court is still functioning and to this day thousands of Palestinians languish in Israeli prisons. The
essential elements of the Palestinian issue remain unresolved – the right to self-determination, the right to
an independent Palestinian state with its capital in Jerusalem, the right to return for Palestinian refugees,
and the right to remove illegal Israeli settlements from the Occupied Territories. All of these constitute basic
unfulfilled rights of the Palestinian people. In light of this wide-ranging disregard for Palestinian rights, the
Centre concludes it must continue its work to protect Palestinian human rights from ongoing violations by
the Israeli government and courts.

The peace accords and the major political changes resulting from the agreement, including the establishment
of the Palestinian National Authority in part of the Occupied Territories, has led to a vital and active
role for the Centre in protecting civil and political rights and in promoting the development of democratic
institutions, an active civil society, and a democratic legal system in Palestine.

The Centre is composed of specialized working units which carry out their activities in an autonomous but
integrated manner.

1. Fieldwork Unit
The fieldwork is considered the basic activity of the Centre. Well-trained field workers located in
different areas of the Gaza Strip obtain accurate and documented legal information on human rights
violations in the Gaza Strip. They gather information in the field from victims and witnesses of human rights violations. The information is received by the coordinator of the unit and other researchers to
verify accuracy. Through the field workers’ presence in the field the Centre has been able to maintain
close contacts with the community. In this way, the community is able to influence the work of the
Centre and the Centre is able to meet the community’s interests and demands.

2. Legal Unit
This unit is composed primarily of a team of lawyers who give free legal aid and counseling to individuals
and groups. The unit also carries out legal intervention with concerned bodies and makes legal representations
before courts in cases that involve broad principles of human rights that affect not just the
individual before the court but the community as a whole. Furthermore, the unit attempts to support
the independence of the judiciary and the rule of law.

3. Democratic Development Unit (DDU)
This unit specializes in the promotion of democracy and the promotion of civil society and the rule
of law. The unit’s team carries out research and organizes workshops and seminars to discuss issues
on human rights and democracy. The unit’s team also prepares comments on draft laws prepared by
the Palestinian Authority in an effort to influence the decision-making process and the adoption of
democratic laws. The unit has been also involved in providing training on human rights and democracy
for youth groups.

4. Economic and Social Rights Unit
This unit seeks to ensure the importance of economic and social rights through research and study.
Such work is particularly important because it tends to be neglected, to some extent, by other human
rights organizations. To achieve its goals the unit conducts studies, workshops, and seminars that focus
attention on economic and social rights in the West Bank and Gaza Strip. The unit seeks to develop
recommendations and standards for each of these rights to be fulfilled in the Palestinian situation.
Moreover, the unit reviews and assesses the legislation and draft laws pertaining to these rights
adopted by the Palestinian Authority in an effort to secure legislation that is in harmony with international
standards. The unit further seeks to provide an informative training base for governmental
and non-governmental personnel who are empowered to set plans and implement programs and
policies relevant to these rights. The goal of such training is to help bring economic and social rights
into alignment with the standards accepted internationally and to ensure the maximum degree of
implementation of these rights.

5. Women Rights Unit
This Unit was established as a pilot project in May of 1997 for one year, renewable upon assessment of
its accomplishments. The initial project was established after a thorough and comprehensive study of
the conditions of Palestinian women and the work of women’s institutions in the Gaza Strip. The Unit
aims to provide legal aid for women and women’s organizations. Intervention on behalf of women in
Shari’a courts is included in its mandate. The Unit further aims to raise awareness of women’s rights
established by international human rights conventions and to raise the awareness of Palestinian
women in regard to their rights under local law. Finally, the Unit is carrying out studies on Palestinian
women and the law, while supporting the amendment of local laws inconsistent with women’s rights.

6. The Training Unit
The Training Unit is a main instrument in PCHR’s work in disseminating and developing a human rights
culture, and promoting democratic concepts in the local community with all its various segments. The
Unit organizes and holds training courses and workshops in order to develop theoretical knowledge
and provide professional skills that can contribute to a real change in the behavior of the society,
which in turn can promote respect for, and protection of human rights and participation in community
building. The target groups of the training courses and workshops are particularly the youth, including
university students, activists of political parties, lawyers, media, union members, and other civil society
groups.

7. The Library
The Centre has established a specialized legal library in subjects related to local and international law,
human rights, and democracy. The library includes books and periodicals in both Arabic and English and
includes all Palestinian laws and Israeli military orders. Documents pertaining to laws of neighboring
Arab countries are also available. Furthermore, the library includes a variety of books and periodicals
detailing the Palestinian question and the Arab-Israeli conflict. The library is open for the free use of
researchers, academics, and students.

Funding of the Centre

Dr. Riad Al-Zanoun Ms. Nadia Abu Nahla Mr. Hashem Al-Thalathini Mr. Issa Saba Mr. Raji Sourani
Director General: Raji Sourani
The Palestinian Centre for Human Rights is an independent legal body dedicated to the protection
of human rights, the promotion of the rule of law, and the upholding of democratic principles in
the occupied Palestinian territory (oPt). Most of the Centre’s activities and interests concentrate on
the Gaza Strip due to the restriction on movement between the West Bank and Gaza Strip imposed
by the Israeli government and its military apparatus.