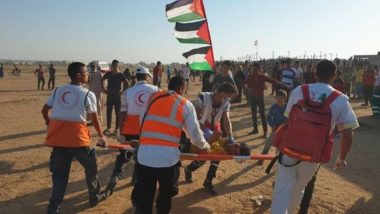 On the 70th Great March of Return, 66 Palestinian civilians were injured due to the Israeli military’s continued use of excessive force against peaceful protests along the Gaza Strip’s eastern border. At least 20 children, 3 women and a volunteer paramedic were among those injured this Friday, 16 August 2019. Twenty-nine civilians were shot with live bullets; 2 of them were deemed in a critical medical condition.

It should be noted there were no protests last Friday in observance of the Muslim holiday “Eid al-Adha”. Today’s protest, which lasted from 16:00 to 19:00, was titled “Palestinian Youth’s Friday” and involved activities such as speeches by political leaders and theatrical performances. Dozens of civilians protested at varied distances from the border fence across the Gaza Strip and threw stones at Israeli force who used excessive force against them.

To this date, PCHR documented 208 killings by Israel since the outbreak of the protests on 30 March 2018, including 44 children, 2 women, 9 persons with disabilities, 4 paramedics, and 2 journalists. Additionally, 13,463 were wounded, including 2,797 children, 415 women, 222 paramedics and 210 journalists, noting that many had sustained multiple wounds on multiple occasions.

Among those wounded, PCHR documented cases where 196 persons have become with disabilities, including 28 children and 5 women: 149 amputees; 21 paralyzed, 26 blind or deaf and 9 sexually disabled.

The following is a summary of today’s incidents along the Gaza Strip border:

Northern Gaza Strip: Israeli forces’ attacks against protesters participated in Abu Safiyah area protests, northeast of Jabalia, resulted in the injury of 24 civilians, including 10 children and a woman. Among those wounded, 15 were shot with live bullets and shrapnel, 5 with rubber bullets and 4 were directly hit with tear gas canisters, noting that they were present 100-250 meters away from the border fence.

Gaza City: Protests set off Malakah area, east of al-Zaytoun neighborhood in eastern Gaza City. Speeches, theatrical performances and other segments were performed at the protest central encampment. Dozens of protestors approached the fence at a 100 meters distance and threw stones with slingshots at Israeli soldiers, who responded with live ammunition and tear gas canisters.  As a result, 6 protestors, including a child and a woman, were wounded: 5 were shot with rubber bullets and one was directly hit with a tear gas canister.

The Israeli soldiers, reinforced with 9 military SUVs, responded with live and rubber bullets in addition to teargas canisters at the protesters, wounding 10 civilians, including a child. Among those injured, 5 were shot with live bullets and shrapnel, 4 with rubber bullets and one was directly hit with teargas canisters. ‘Arabi Maher ‘Abed al-Hameed Abu Hasnah (29) sustained serious wounds after being shot with a live bullet in his testicles.

Khan Younis: Israeli forces’ attacks against protestors participating in Khuza’a protests resulted in the injury of 9 civilians, including 2 children and a woman. Among those injured: 3 were shot with live bullets and shrapnel, 2 with rubber bullets and 4 were directly hit with tear gas canisters. Sabreen Isma’il Ibrahim al-Najjar (42) was hit with a rubber bullet in her head and sustained minor wounds.

Rafah: Hundreds participated in the eastern Shokah protests, where no activities were reported due to the power outage. Dozens approached the border fence and threw stones. The Israeli soldiers used live and rubber bullets and teargas canisters against the protestors.

As a result, 17 civilians were injured, including 6 children and a volunteer paramedic: 6 were shot with live bullets, 4 shot with rubber bullets and 7 were directly hit with tear gas canisters. The volunteer paramedic Nour ‘Atah Mohamed Saleem (16) was hit with a rubber bullet in her abdomen and sustained minor wounds. Additionally, Basem Raied Barakat (24) was hit with a live bullet in his right thigh; his condition was deemed critical.