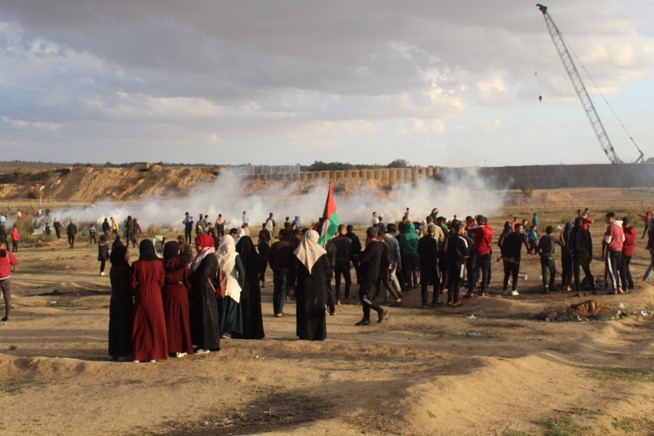 The Palestinian Center for Human Rights in Gaza reported that 64 Palestinian civilians, including 19 children, a paramedic, and 4 women, were shot and injured by Israeli occupation forces’ (IOF) fire against peaceful protestors at the 83rd Great March of Return (GMR), on Friday, December 6, 2019. Israeli forces preceded the protests by describing them as “chaotic and violent”, threatening to target the protesters. In a video, Colonel Iyad Sarhan, Head of the Coordination and Liaison Administration (CLA) for Gaza, called upon the Gaza civilian residents “not to go back to the violent way and not to take part again in the riot and protests along the border fence.”

He also attempted to intimidate demonstrators, “if any of you approach the fence, you will be targeted and pay a heavy price for your wrong choices,” adding that, “Being in the border area will endanger your lives.”

This week, Israeli forces resumed the use of excessive force against peaceful protestors, shooting 4 civilians with live bullets as well as rubber bullets, mainly in protesters’ upper bodies.

One injured Palestinian, in eastern Rafah, was deemed in serious condition after being shot with a rubber bullet in the head, suffering from a skull fracture.

At 14:00 Palestinian civilians began heading to the five GMR encampments in the eastern Gaza Strip to join protest titled: “GMR Will Continue” and lasted until 16:30.

Since the outbreak of GMR on 30 March 2018, PCHR documented 215 civilian killings by IOF, including 47 children, 2 women, 9 persons with disabilities, 4 paramedics and 2 journalists. Additionally, IOF shot and injured 14,759 civilians, including 3,715 children, 391 women, 255 paramedics and 218 journalists, noting that many sustained multiple injuries on separate occasions. Northern Gaza Strip: demonstrations took part in eastern Jabalia. Protesters threw stones at IOF stationed along the border fence. IOF shot and injured 14 civilians, including 5 children and 2 women: 2 with live bullets and shrapnel, 8 with rubber bullets and 4 were hit with tear gas canisters.

Gaza City: hundreds took part in Malaka area in eastern Gaza City. IOF targeted them with teargas canisters and live and rubber bullets. As a result, 5 civilians were injured; 4 of them were hit with tear gas canisters.

Central Gaza Strip: protests took part in eastern al-Buriej Camp. Hundreds gathered near the border fence and attempted to throw stones at IOF, who fired live and rubber bullets and tear gas canisters at them. As a result, 4 civilians, including a woman, were injured: 1 with a live bullet and the others with teargas canisters.

Khan Younis: Hundreds civilians joined today’s protests in Khuza’ah area in eastern Khan Yunis. Most of the protesters stayed in the encampment for the activities while dozens gathered near the border fence and attempted to throw stones and firecrackers. IOF fired live ammunition, rubber bullets and tear gas canisters at them in addition to firing waste water at them from water cannons. As a result, 6 civilians, including 3 children and 2 paramedics, were injured with rubber bullets and taken to hospitals.
Moreover, many civilians sustained superficial rubber bullets wounds and suffocated due to tear gas inhalation. They received treatment on the spot. The wounded paramedic, Dalia Bassam Ahmed Abu Reidah, 21, working within Watan Medical Team, was shot with a rubber bullet in her left hand. Paramedic Mohammed Ziyad Zoghbor, 35, a PRCS volunteer paramedic, was shot with a rubber bullet in the right shoulder. It should be noted that some Palestinian young men flocked to the protests at 13:00 and were shot with live bullets and hit with tear gas canisters before the crowds headed to the area. As a result, a child was wounded with a rubber bullet.

Rafah: hundreds of protestors gathered in eastern al-Shawka neighborhood while others remained at the protest encampment, where speeches and theatrical performances were performed. Dozens attempted to approach the fence and throw stones and burned tires. Israeli forces fired live ammunition, rubber bullets and tear gas canisters at protestors and pumped wastewater at them. As a result, 17 civilians, including 11 children, were injured: 2 shot with live bullets and shrapnel, 8 with rubber bullets and 7 with tear gas canisters.
Rajeh Mohammed al-Qadi, 24, who was shot with a rubber bullet in the head, causing a fractured skull, was admitted to the Gaza European Hospital in Khan Younis for his serious condition.