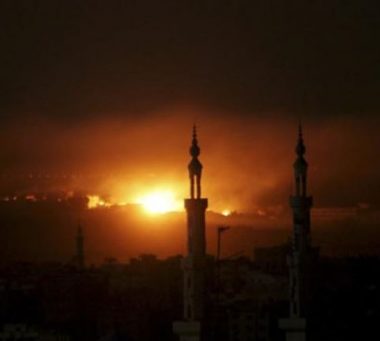 The Middle East Eye reported that Israeli aircraft carried out attacks on the besieged Gaza Strip, early Sunday, Palestinian security officials said, hours after three rockets were said to have been fired from the enclave.

Israel claims three rockets were launched from the besieged Gaza Strip towards southern Israel and intercepted by its Iron Dome defence system.

The strikes targeted two sites belonging to Al-Qassam Brigades, the Hamas military wing, in northern Gaza, with another series of attacks at a Qassam site west of Gaza City, there were no immediate reports of injuries.

All three projectiles were reportedly intercepted by the Iron Dome defence system, the Israeli army said, amending an earlier statement according to which two of the three rockets were shot down.

Medics had treated three people in the southern Israeli town of Sderot who suffered minor injuries while seeking shelter as air raid sirens went off, according to the Magen David Adom emergency medical service. Note the fact that it was not a ‘rocket’ that injured people in Israel, but the air raid siren.

There were no immediate reports of material damage.

According to KAN Radio, Israeli aircraft were scrambled to the northern Strip three times on Saturday, following reports of suspicious activity near the border, but returned to base after checking that there had been no infiltration into Israel, the Jerusalem Post said.

Israel states that it holds the Hamas movement responsible for all rocket fire coming from the territory, although it has targeted other militant groups there.

Israel has imposed a land, air and sea blockade on the Gaza Strip since 2007,
and inflicted three military offensives against the besieged enclave; 2008 – Operation Cast Lead, 2012 – Returning Echo, and 2014 – Operation Protective Edge.

It is important to remember the United Nations General Assembly Resolution 3246; the universal realization of the right of peoples to self-determination and of the speedy granting of independence to colonial countries and peoples for the effective guarantee and observance of human rights.

This resolution reaffirmed the legitimacy of the peoples’ struggle for liberation from colonial and foreign domination and alien subjugation by all available means, including armed struggle.