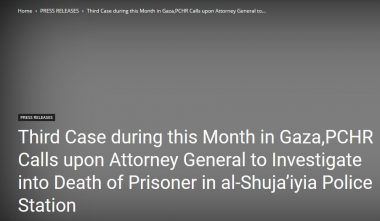 The Palestinian Center for Human Rights: Third Case during this Month in Gaza: On Sunday morning, medical resources at al-Shifa Hospital in Gaza City, declared the death of prisoner (A. S. F), after he was referred to al-Shifa Hospital from al-Shuja’eyya police station.

The prisoner was serving a 1-year sentence in jail on grounds of theft. The Palestinian Center for Human Rights (PCHR) expresses its deep concern over repeated death cases in the Gaza police stations and detention facilities in various circumstances.

PCHR is also concerned that these cases might be due to torture and degrading treatment that detainees were exposed to or resulting from negligence of providing them protection and security.

According to the victim’s brother, who was also arrested with him in the Shuja’eyya police station on grounds of another theft incident, at approximately 07:30 on Sunday, while his brother (A. S. F) was heading to the bathroom and before he entered, he fell on the ground and fainted. His body was trembling and his color changed into red. He added: we called the police, who responded after 10 minutes and took my brother to al-Surani Clinic. The al-Surani Clinic refused to admit him, so he was returned to the police station. The police then brought a doctor, who was detained on financial grounds, to check him up. The doctor confirmed that his health condition is serious, so he was transferred to al-Shifa Hospital, where he succumbed to his wounds.

The Forensic Medicine Department at al-Shifa Hospital declared that (A. S. F) died due to Hypertrophic cardiomyopathy (HCM). The victim’s brother added that his brother was exposed to torture several times while he was in the prison. He also said that when my family previously visited my brother, he complained of pain in his chest and being maltreated and tortured by the police officers.

The Ministry of Interior and National Security in Gaza published a press statement on its website for Ayman al-Batniji, Spokesperson of the Palestinian Police in Gaza, saying that “the detainee (A. S. F), 30, from Gaza City, died after he fainted while he was in al-Shuja’eyya police station.

He also pointed out that the victim received first aid in the prison and was then taken to al-Shifa Hospital, where he succumbed to his wounds. Al-Batniji also said that the victim’s body was reffered to the Forensic Department to find out the death cause.

He confirmed that the victim had been detained since March on grounds of theft.

It should be noted that this is the third death in Gaza detention facilities. On 22 September 2017, medical sources in al-Quds Hospital in Gaza City, announced the death of M. S. (16) after he stayed in several hospitals due to being in clinical death since 02 September 2017. M.S. was detained in Beit Lahia police station, which is designated for adults, on 02 July 2017 on grounds of a personal dispute.

On 02 September 2017, the police stated that M. S. committed suicide in Beit Lahia police station using his undershirt. He arrived in a state of clinical death at the Indonesian Hospital in Jabalia and then was transferred to the Intensive Care Unit (ICU) in al-Shifa Hospital.

After that, M. S. was transferred to al-Quds Hospital to be announced dead. The victim’s family said to PCHR that his son complained about the maltreatment he received in the prison when they visited him on the day of his death. They added that they received a phone call from the police informing them that M. S.  had a fight and was wounded and transferred to the Indonesian Hospital in Jabalia. They said that their son was not moving and the doctors put him on the cardiopulmonary resuscitation device. There were signs of incised wounds on the abdomen and shoulders and a swelling in the neck.

On 19 September 2017, the Public Prosecution announced the death of a detainee after he jumped out of the investigation room’s window in the 4th floor in the Gaza Prosecution building. The Public Prosecution added that KH. H. sustained serious wounds and was then transferred to the hospital to be announced dead. On 17 September 2017, KH. H. was detained in al-‘Abbas police station, after accusing him of stealing. He was brought before the Gaza Prosecution on the next day morning in its head office on al-Shifa Street near al-Shifa building in the center of Gaza City.

According to the statement of the victim’s father to PCHR’s field worker, “At approximately 12:00 on Tuesday, 19 September 2017, I received a phone call from the neighbors telling me that my son died. My brother then called me to tell me that there is news spread on the websites about my son’s death. When I headed to see the body, I found a bruise on my son’s left eye and beating signs on his feet and throughout his body. After that, I went to the office of the Attorney General and demanded not to bury my son until I know the circumstances of his death. I told them that my son would never commit suicide. The Attorney General advised me to bury my son. My son was buried, but the Attorney General assured me that he will open an investigation into the incident and will not tolerate any person involved.”

This incident and the previous ones require the Attorney General and officials in the Gaza Strip take serious action and reveal the facts, particularly the arrest circumstances and torture cases.

The human rights organizations annually receive many complaints of torture, which are only a small part of the torture reality in the investigation centers.

PCHR confirms that the Public Prosecution and the detention facilities are responsible for the life and safety of the arrestees.

Thus, PCHR calls upon the Attorney General to open a serious investigation into the incident and publish the results on public.

PCHR also stresses to take in consideration the tort liability of the Public Prosecution as although it is not the first incident of its kind, no precautionary measures were taken.

PCHR calls upon the Attorney General and decision makers in the Gaza Strip to take serious action to end the deteriorating status of the detention and investigation facilities, seriously work to stop using torture in the prisons and comply with the Palestinian Basic law and Palestine’s International obligations, particularly the International Covenant on Civil and Political Rights (ICCPR) under which Article 10 stipulates that: “All persons deprived of their liberty shall be treated with humanity and with respect for the inherent dignity of the human person.”