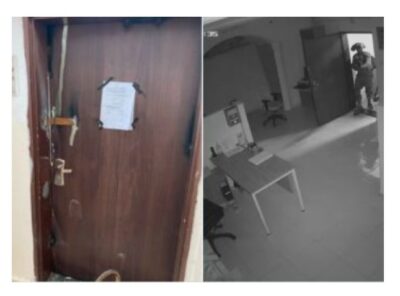 The Palestinian Center For Human Rights (PCHR): On Thursday dawn, 18 August 2022, Israeli Occupation Forces (IOF) raided and closed 7 Civil Society Organizations (CSOs) in Ramallah and confiscated some of their contents.

The decision came few hours after the announcement of Israeli Defense Minister, Benny Gantz, 3 CSOs: the Bisan Center for Research and Development, the Union of Palestinian Women’s Committees (UPWC), and Addameer Prisoner Support and Human Rights Association as “terrorist organizations”, for allegedly funding the Popular Front for the Liberation of Palestine (PFLP).

The decision was made after an appeal submitted by these organizations against a previous decision issued last October labeling 6 CSOs as terrorist organization was rejected.

According to investigations conducted by the Palestinian Centre for Human Rights (PCHR), Today at dawn, large number of IOF moved into Ramallah and Al-Bireh, where they raided 7 CSOs and human rights organizations and confiscated most of their contents.

As a result, none of those working in these organizations was able to see the extent of sabotage there, or what was confiscated.

PCHR stresses that the closure is part of IOF’s systematic policy to polish off the Palestinian civil society and undermine its role in supporting the Palestinian resilience under the occupation.

PCHR hereby emphasizes that any assault on the civil society organizations constitutes a flagrant violation of the Fourth Geneva Convention and violates the Israeli occupation authorities’ obligations under the International Covenant on Civil and Political Rights, which guarantees the right to freedom of association in Article 22.

PCHR emphasizes that IOF adopts a systematic policy to tighten the screws on the Palestinian CSOs that has started since the 2001 Durban Conference against Racism in South Africa and escalated after the State of Palestine had acceded to the International Criminal Court (ICC) in 2015.

These restrictions included the prosecution of human rights activists, and limiting their travel and movement, raiding and shutting down leading organizations in the fields of human rights and services.

PCHR stresses that IOF’s pursuit, designation of Palestinian NGOs as “terrorist”, and smear campaign against them aims at closing down these organizations and drying up external donor funding; thus, having only one narrative and hiding the truth about IOF crimes committed in the oPt.

PCHR stresses that such practices are part of an old/new campaign against the CSOs and human rights organizations because of its pioneering role in exposing IOF’s violations and its international work, particularly at the International Criminal Court (ICC).

PCHR indicates that such practices come at a time IOF’s violations against Palestinian civilians at the height as the Palestinian CSOs countered the silence about these violations with exposing IOF’s crimes and unprecedented fierce campaign against the Palestinian people during the past 20 years.

PCHR affirms that CSOs are the last resort to protect the inalienable rights of the Palestinian people and to defend civilian victims from the Israeli violations. These organizations will never and even refuse to be a good victim for the occupation.

CSOs are fully aware of their role and duty and will not surrender or get caught up in defending their existence, because they exist for a noble, legal, national, and humanitarian mission, which is to defend the Palestinians’ dignity, rights and rule of law.

It is worth noting that the Israeli authorities’ decision to classify 6 CSOs as terrorist organizations was broadly and internationally condemned, specifically by the United Nations bodies, Special Rapporteurs, and the High Commissioner for Human Rights.

Also, 10 European Union (EU) Member States rejected the Israeli decision, considering it was based on unfounded accusations and affirmed in a joint statement that they will continue to work with these organization, and that having a free and strong civil society is indispensable to promote the democratic values.

PCHR stresses the Palestinian authority (PA)’s role in protecting the civil society and its organizations, especially as these organizations legally operate in the West Bank and its offices located in Palestinian Authority-controlled areas.

PCHR also calls on the EU and the High Contracting Parties to the Geneva Convention to take immediate action in order to compel Israel to abolish the decision to close the CSOs and stop all violations against them.