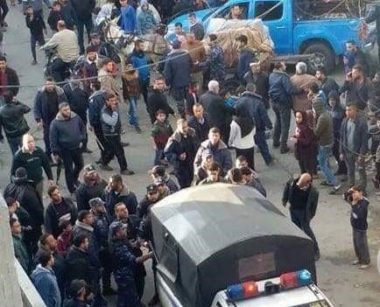 Date: 14 March 2019 – The Palestinian Center for Human Rights (PCHR) strongly condemns the security services’ dispersal of the peaceful protests organized in several areas in the Gaza Strip upon calls by the “Youth Movement” to improve living conditions as  the security services attacked the protestors by beating and arresting them.

PCHR calls upon the Attorney General to investigate these attacks and bring the perpetrators into justice.  PCHR also stresses that the freedom of expression and peaceful assembly are rights guaranteed in the Palestinian Basic Law and shall not be prejudiced under any pretext, saying that those demanding the occupation to respect the freedom of opinion and expression and right to peaceful assembly should respect them first.

According to PCHR’s investigations, on Thursday afternoon, 14 March 2019, hundreds of civilians gathered in each of Jabalia refugee camp, Deir al-Balah refugee camp, al-Bureij refugee camp, and Rafah City upon calls by youth groups known as “Youth Movement” published on social media to participate in the peaceful protests so-called “Let’s Build it- Revolution of the Hungry- Down to the High Prices” against the economic conditions.

The security services attacked and forcefully dispersed those protests after shooting in the air and beating the protesters.  They also arrested many of protestors, taking them to the police stations.  Previously, the security services carried out an arrest campaign that targeted some of those organizing and calling for the protests.

In Jabalia refugee camp, heavy presence of police and anti-riot officers was observed at al-Trans Intersection in the center of the camp, where the protest was supposed to start.  Around the same time, the Ezz al-Deen al-Qassam Brigades, Hamas Movement’s military Wing, held a military parade on the camp streets and stationed at the main intersections

.  When civilians started swarming to participate in the protest and became hundreds, the security officers severely beat them up and pepper-sprayed some protesters’ faces.  Moreover, civilians affiliated with Hamas crept among the protestors and started attacking them and raising posters of President Mahmoud ‘Abbas written on them “Abbas, Leave” in attempts to cause confusion.

Following a hit-and-run between the protestors and security officers, the latter severely beat up the protesters and confiscated dozens of cell phones from the hands of civilians and journalists to prevent them from covering the attacks.

Among those was journalist Sami ‘Issa, Hadaf News’ editorial director.  Further, the security officers shot in the air and arrested dozens of civilians and journalists, taking them to the police stations, including female journalist Nour Talal al-Najjar.

In Deir al-Balah refugee camp, at 16:00, dozens of young men, women and children gathered at the parking lot in the center of the camp and their numbers increased to hundreds. Some burned tires and chanted slogans against the high cost of living and taxes.

As a result of the police attacks, many protestors were wounded, including women. Due to the beating, Seventeen of them were taken to al-Aqsa hospital in the city. Later, the police officers arrested a number of those wounded from the hospital.

Videos were posted on social media showing police officers beating a protester during the protest with sticks and though he fell on the ground, they kept beating him.

At the same time, about 150 persons gathered in al-Bureij refugee camp in the central Gaza Strip and set tires on fire.  The police officers intervened to disperse protestors, beat them with batons, and arrested several of them.

In Rafah City in the southern Gaza Strip, at 16:00, dozens of young men gathered at al-Shuhada Square (formerly Al-Najma). Police and Internal Security forces arrived, dispersed the young men, arrested at least five of them and confiscated cell phones.

The young men participating in the protest spread out quietly and no confrontations with the security forces were reported.

PCHR emphasizes that the right to peaceful assembly and freedom of opinion and expression is guaranteed in the Palestinian Basic Law and the international human rights standards and stresses that the right to peaceful assembly only requires a written notification to be sent to a Police Director or the Governor according to Article 3 of the Public Meetings Law 12/1998. Moreover, Violating this condition is not enough for dispersing the demonstration or arresting the organizers unless the demonstration included riots;

PCHR Calls upon the Attorney General to open a serious investigation into these incidents and bring the perpetrators into justice.

PCHR also calls upon the competent authorities to take the necessary measures to stop such violations and respect civilians’ public freedoms that are guaranteed constitutionally and according to the international human rights standards.

PCHR also urges the Ministry of Interior to take the necessary measures to prevent recurrence of such illegal conduct by the security services in the future.