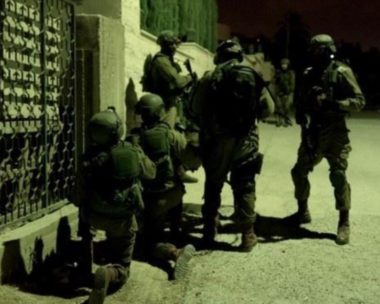 The Palestinian Prisoners’ Society (PPS) has reported that Israeli soldiers abducted, on Thursday at dawn, sixteen Palestinians, including six students of Birzeit University, in several parts of the occupied West Bank, in addition to four Palestinians, who were taken prisoner, on Wednesday evening,

The PPS stated that the soldiers invaded and ransacked dozens of homes across the Wet Bank, including occupied East Jerusalem, and interrogated dozens of Palestinians while inspecting their ID cards.

The soldiers also closed and surrounded entire Palestinian communities, before invading them, and storming many homes.

In addition, the army installed many roadblocks across the West Bank, before stopping and searching dozens of cars, and interrogated scores of Palestinians, while inspecting their ID cards.

One of the abducted Palestinians is Samer al-Qabbani, one of the civilian guards of the Al-Aqsa Mosque, and is one of four guards who were taken by the soldiers since Wednesday.

On Wednesday evening, the soldiers abducted four Palestinians from their homes in the al-’Oja town, in Jericho.