PCHR: In New Crime of Excessive Use of Force, IOF Kill Palestinian Child Northeast of Ramallah 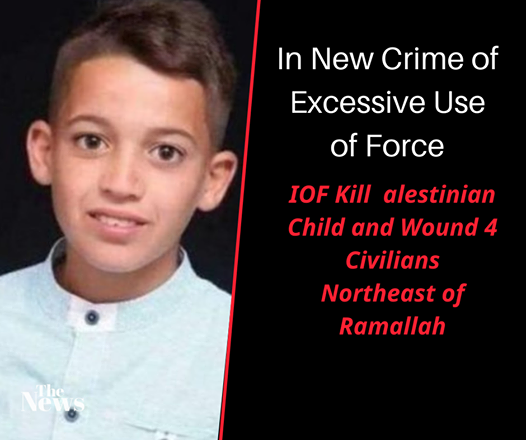 In new crime of excessive use of lethal force, Israeli occupation forces (IOF) killed, on Friday December 4, 2020, a Palestinian child and wounded 4 other civilians during the suppression of a peaceful protests in Ras al-Teen area near the eastern entrance to al-Mughayyir village, northeast of Ramallah. The child died few hours after sustaining a live bullet in his abdomen without any justification or posing threat to the soldiers’ lives.

According to investigations conducted by the Palestinian Centre for Human Rights (PCHR), at approximately 11:00 on Friday, a peaceful protest took off in the center of al-Mughayyir village, northeast of Ramallah, at the call of the villagers, towards lands under the threat of confiscation and in protest to the establishment of new settlement outposts in Ras al-Teen area near the eastern entrance to the village.

IOF immediately suppressed the protest and fired live and rubber bullets, sound bombs and tear gas canisters at the protestors. As a result, 4 civilians sustained rubber-coated steel bullet wounds in their lower extremities and received treatment on the spot. At approximately 13:30, as the clashes were ongoing, Israeli soldiers shot at ‘Ali Ayman Naser Abu ‘Aliya (14), wounding him with a live bullet in his abdomen below the lung on the right side of his body.

Abu ‘Aliya was immediately taken via a Palestinian Red Crescent Society (PRCS) ambulance to the Palestine Medical Complex in Ramallah, where he underwent a surgery. At approximately 18:00 on the same day, medical sources pronounced him dead. The medical report showed that the bullet penetrated the liver and ruptured it.

PCHR strongly condemns the excessive use of lethal forces, which led to the killing of the child and inflicting casualties without the presence of any threat to the soldiers’ lives.

PCHR notes the recurrence of similar crimes, as PCHR’s staff documented the killing of 22 Palestinian civilians, including 6 children and 1 woman, by IOF since the beginning of 2020 in the West Bank and Gaza Strip. Also, PCHR’s fieldworkers monitored and documented IOF targeting of children during the suppressing of protests and during incursions into the West Bank cities in recent weeks.

PCHR reiterates its call on the international community to act immediately to stop the IOF crimes and renews its call on the High Contracting Parties to the Fourth Geneva Convention to fulfill their obligations under Article 1; i.e. to respect and ensure respect for the Convention in all circumstances and their obligations under Article 146 to prosecute persons alleged to commit grave breaches of the Fourth Geneva Convention.

These grave breaches constitute war crimes under Article 147 of the same Convention and Protocol (I) Additional to the Geneva Conventions on the guarantee of Palestinian civilians’ right to protection in the occupied Palestinian territory (oPt).