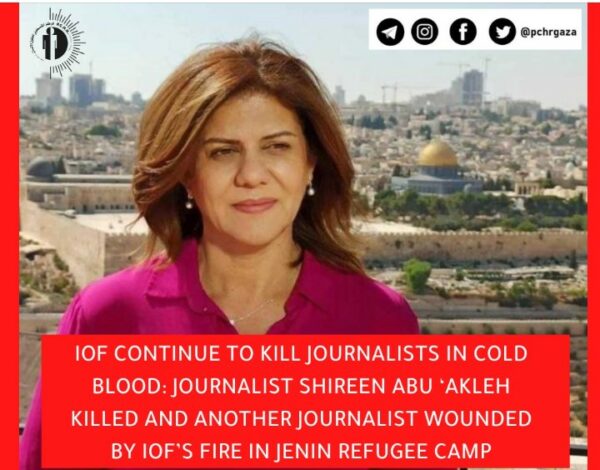 The Palestinian Centre for Human Rights (PCHR) condemns in the strongest terms the murder of journalist Shireen Abu ‘Akleh, Al-Jazeera Channel’s reporter, and injury of her colleague by the Israeli occupation forces’ (IOF) fire this morning during their coverage of IOF’s incursion into Jenin refugee camp.

PCHR emphasizes that targeting journalists constitutes a crime under international human rights law and international humanitarian law. PCHR believes what happened reflects a policy to silence the press practiced by the Israeli occupation, as PCHR has documented for decades, aiming to hide the truth and stifle a counter-narrative that exposes the Israeli occupation’s crimes against the Palestinian people.

According to PCHR’s investigations, at around 06:30 on Wednesday, 11 May 2022, IOF moved into Jenin and surrounded a house belonging to ‘Abdullah al-Hosary, who was killed earlier in the camp. At the time, an exchange of fire occurred between Palestinian armed groups and Israeli soldiers who were surrounding the house.

The exchange of fire stopped and at around 06:45, IOF directly targeted the journalists who were covering the events in the camp, particularly near a stone factory. These journalists were wearing their flak jackets clearly marked with the word “PRESS” and their helmets.

As a result, Al-Jazeera’s reporter, Shireen Abu ‘Akleh (51), was shot in the head, and Journalist ‘Ali Sadeq Salim Samoudi (55), who is also a producer for Al-Jazeera, was shot in the back. Both of them were taken to Ibn Sinai Hospital in Jenin, where at around 07:15, the medical crews announced the death of Abu ‘Akleh after succumbing to her injury.

According to data collected by PCHR’s staff, Shireen Abu ‘Akleh was injured while wearing a helmet and blue flak jacket both marked with the word “PRESS.” IOF, who deployed in the area and whose snipers topped the roofs of houses there, opened fire at Abu ‘Akleh, wounding her precisely below the ear, i.e. the only area not covered by the helmet. Thus, the injury indicates an intent of fatal shooting.

The Israeli military spokesperson, Avichay Adraee, said in a statement that: “there is a possibility, now being looked into, that reporters were hit – possibly by shots fired by Palestinian gunmen.”

Eyewitnesses and journalists that were in the area confirmed that when Abu ‘Akleh was targeted there was no exchange of fire with the armed Palestinians, and that the only shooting in the area was from the IOF.

The attack on Shireen Abu ‘Akleh and her colleague Samoudi despite both of them wearing a helmet and vest with clear “PRESS” insignia, and the deliberate shooting by Israeli snipers on the unprotected area of her head, right below the ear, prove beyond doubt that Israeli soldiers have orders or at least a permission to inflict casualties and deter journalists from covering the Israeli crimes. A matter of fact that has occurred and been documented on several occasions.

This crime comes in the context of systemic attacks on journalists. In 2021, PCHR documented 150 violations against journalists and media personnel operating in the occupied Palestinian territory (oPt), including the murder of a journalist after IOF bombed his house in Gaza City during the Israeli aggression in May 2021. So far this year, 40 journalists were injured by IOF while covering incidents.

PCHR urges the relevant international parties, especially the International Federation of Journalists and United Nations human rights mechanisms, particularly the Special Rapporteurs for both the right to freedom of expression and the right to peaceful assembly, to monitor violations and take serious actions in response to such incidents, particularly those relating to the direct targeting of journalists.

PCHR calls upon the Prosecutor of the International Criminal Court (ICC) and the International Commission of Inquiry to visit the oPt and to take a clear and unwavering position on the Israeli occupation crimes against Palestinian civilians, including journalists, as ongoing and recurrent crimes.

PCHR also urges the ICC to open a special online portal to receive testimonies, complaints, videos, and eyewitness statements, pursuant to the one adopted for the situation in Ukraine.