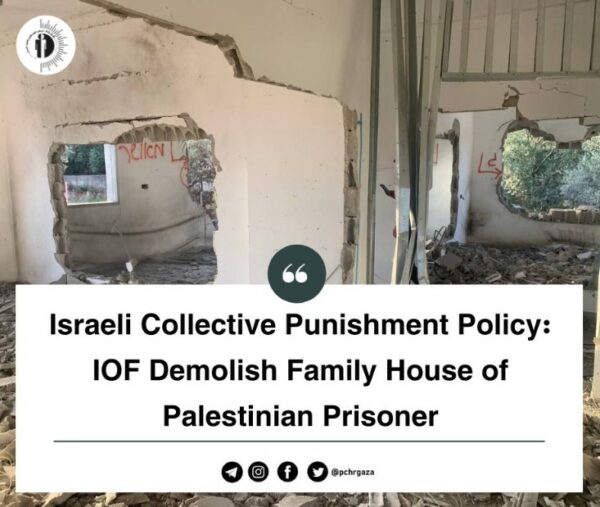 Date: 7 May 2022 – Time: 17:00 GMT: The Palestinian Center For Human Rights (PCHR): Under its collective punishment policy against Palestinians accused of conducting attacks against Israeli occupation forces (IOF) or settlers, IOF demolished the family house of a Palestinian prisoner from Jenin.

According to investigations conducted by the Palestinian Centre for Human Rights (PCHR), at approximately 03:00 on Saturday, 7 May 2022, IOF accompanied by a bulldozer, Special Unit Members, and Engineering and Explosive Devices teams of experts moved into Silat al-Harithiya village, west of Jenin.

They surrounded Omar Ahmed Mohammed Yasin Jaradt’s house on the outskirts of the village and forced its residents to leave along with 10 other families living in nearby houses. IOF fired tear gas canisters and sound bombs to stir fear among civilians and prevent them from approaching.

As a result, civilians gathered in the area where IOF deployed and threw stones at the latter amidst clashes where IOF fired rubber-coated and live bullets, tear gas canisters, and stun grenades at the protestors.

As a result, several persons suffocated due to tear gas inhalation and were treated in the field. IOF also arrested Mohammed Naser Abu-Ahmed Salah (25) from the village.

During the raid, which continued until 07:00 in the morning, IOF planted explosives inside the second floor of Jaradat’s family 3-floor family home, and remotely detonated them causing partial destruction to the entire building; each floor is 150 sqm, and a family of three lived there, including one child.

It should be noted that Israeli occupation authorities approved the demolition of Jaradat’s house on 1 March 2022. Jaradat was arrested by the IOF on 19 December 2021 after accusing him, along with others, of killing an Israeli settler in an attack near Homesh settlement, northern Nablus, on 16 December 2021.

So far in 2022, IOF demolished 5 houses and sealed a sixth after destroying its internal contents. These attacks are categorized as acts of collective punishment.

PCHR condemns the crime of demolishing houses that falls within the collective punishment policy adopted by IOF against Palestinian civilians, which is protected by the Israeli judicial system.

PCHR reminds that this policy is internationally prohibited according to Article 33 of the Fourth Geneva Convention, which states that, “No protected person may be punished for an offense he or she has not personally committed. Collective penalties and likewise all measures of intimidation or of terrorism are prohibited. Pillage is prohibited. Reprisals against protected persons and their property are prohibited.”

Therefore, PCHR reiterates its call upon the international community to take immediate action to put an end to the Israeli crimes; and reiterates its call upon the High Contracting Parties to the 1949 Fourth Geneva Convention to fulfill their obligations under Article 1; i.e., to respect and ensure respect for the Convention in all circumstances and their obligations under Article 146 to prosecute persons alleged to commit grave breaches of the Fourth Geneva Convention.