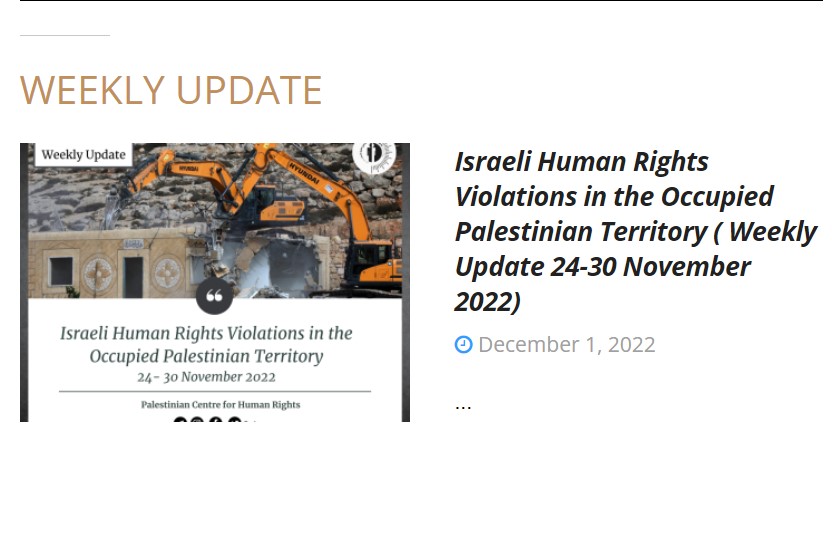 Five Palestinian civilians, including 2 brothers, were killed and 18 others, including 5 children and a paramedic, were injured, while dozens of others suffocated in Israeli Occupation Forces (IOF) attacks in the Gaza Strip and West Bank, including occupied East Jerusalem.

On 29 November 2022, three Palestinian Civilians, including 2 brothers, were killed and 6 others, including 2 children, were injured by IOF fire in the West Bank. The two brothers were killed in Ramallah, while the third civilian succumbed to his injury in Hebron. (Details are available in PCHR’s press release).

On 29 and 30 November 2022, two Palestinian civilians were killed by IOF fire during the latter’s incursion into Jenin and Ramallah in the West Bank. (Details are available in PCHR’s press release).

Meanwhile, those injured were victims of excessive use of force that accompanied IOF’s incursion into the Palestinian cities and villages, or suppression of peaceful protests organized by Palestinian civilians, and they were as follows:

On 25 November 2022, three Palestinians, including a child, were shot with rubber-coated bullets during IOF’s suppression of Kafr Qaddoum weekly protest in northern Qalqilya.

On 29 November 2022, a Palestinian was shot with a live bullet in his foot by IOF while trying to infiltrate through a hole in the annexation wall near Rummanah village in western Jenin, to work in Israel. Also, another Palestinian sustained a rubber bullet injury in his foot during clashes with IOF in Zeita village in Tulkram.

On the same day, six Palestinians, including a paramedic and 2 children, were shot with live and rubber-coated bullets, while dozens of others suffocated during clashes with IOF following the latter’s suppression of the participants in the funeral of Mofeed Ikhlayil, who at dawn succumbed to his injury he sustained the day before by IOF fire.

IOF demolished 4 houses and 4 residential tents, rendering 3 families of 22, including 4 women and 14 children, homeless. Also, IOF demolished 5 economic facilities, razed, and seized a plot of land and confiscated agricultural vehicles in the West Bank, including occupied East Jerusalem. Details are as follows:

On 26 November 2022, IOF confiscated a bulldozer belonging to Qarawet Bani Hassan Municipality in Salfit while cleaning the sides of the main street and water channels from stones and sand. They also chased the workers while working in various areas in the village.

On 27 November 2022, the Israeli occupation authorities confiscated an excavator and a generator in al-Bowaib village in southern Hebron.

On the same day, IOF handed a demolition notice to Khashm al-Karam School built of bricks and tinplate a week ago with European funds in eastern Yatta city in Hebron, under the pretext that the construction located in the firing zone (917). The school was built to serve 50 male and female students from the village, who were receiving their education in Hamida School, which is about 6 km away from their houses. Also, IOF distributed a notice to raze a 500-meter-long paved street in Wad al-‘Amayir area in southern Hebron, under the pretext of working without a prior Israeli permission.

On 29 November 2022, IOF demolished a 70-sqm residential barrack in ‘Anata village in occupied East Jerusalem, under the pretext of unlicensed construction, rendering a family of 7, including 2 women and 3 children, homeless. Also, IOF razed a 2-dunum agricultural land (2 dunums) and uprooted olive, citrus and palm trees in Hizma village in occupied East Jerusalem for settlement expansion purposes. It is worth noting that last year the Israeli authorities announced the confiscation of 13 dunums from Hizma village’s lands to build a new settlement road (one kilometer long and 16 meters wide), including the land mentioned above.

On 30 November 2022, IOF demolished 4 residential tents and 4 livestock barns in eastern Aqraba village in Nablus, under the pretext of illegal construction in Area C.

”Since the beginning of 2022, IOF made 137 families homeless, a total of 805 persons, including 158 women and 368 children. This was the outcome of IOF demolition of 154 houses and dozens of residential and agricultural tents. IOF also demolished 107 other civilian objects, leveled vacant areas of land and delivered dozens of notices of demolition, cease-construction, and evacuation.

”Since the beginning of the year, settlers conducted at least 249 attacks. In two of the attacks, 2 Palestinians were killed.

IOF carried out 181 incursions into the West Bank, including occupied East Jerusalem. Those incursions included raids and searches of civilian houses and facilities and establishment of checkpoints. During those incursions, 54 Palestinians were arrested, including 4 children and a journalist. In the Gaza Strip, on 27 November 2022, Israeli naval forces arrested 6 fishermen on board of 2 fishing boats off Gaza shore and confiscated the fishing boats. The fishermen were released later. (Details available in PCHR’s press release)

”So far in 2022, IOF established at least 4181 temporary military checkpoints and arrested 190 Palestinians at those checkpoints