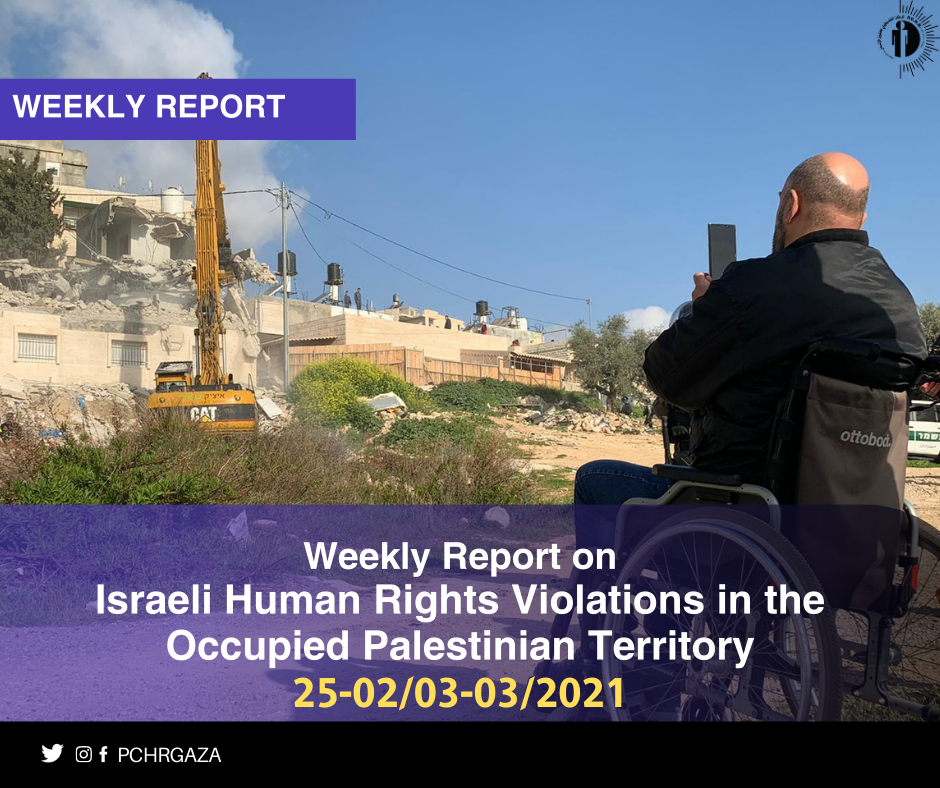 Israeli occupation forces (IOF) continued to commit crimes and multi-layered violations against Palestinian civilians and their properties, including raids into Palestinian cities that are characterized with excessive use of force, assault, abuse and attacks on civilians that are mostly conducted after midnight and in the early morning hours. Additionally, IOF conducted widescale demolitions in occupied East Jerusalem; settlers launched scales across the West Bank, set fire to a church and assaulted a media crew in Jerusalem.

IOF shot and injured 5 civilians (including 4 children) in its attacks on peaceful protests in the West Bank: 3 Palestinians, including 2 children, in Hebron; another child was arrested after IOF injured him near the Annexation Wall in Ramallah; and another child was wounded during IOF attacks on Kufur Qaddoum – Qalqilia weekly protest. Dozens of others suffocated due to tear gas inhalation.

IOF carried out 94 incursions into the West Bank, including occupied East Jerusalem. Those incursions included raids of civilian houses and shootings, enticing fear among civilians, and attacking many of them. During this week’s incursions, 104 Palestinians were arrested, including 11 children and 2 women.

In the Gaza Strip, IOF arrested the companion of a patient (from Khan Younis) after he was summonsed for an interview with Israeli intelligence at Beit Hanoun “Erez” crossing.

Ramallah: the occupation announced plans to confiscate 193 dunums from Deir Dibwan and Rammun.

Hebron: two residencies and a room were demolished; a tire-made tent was also demolished. A 220 sqm barracks was dismantled and confiscated.

Hebron: attacks and provocations against civilians in Haret Jaber and Al-Shuhada Street.

Occupied East Jerusalem: child assaulted in the French Hill neighborhood; vehicles assaulted; the entrance of the Roman Church was set on fire; and Anadolu News Agency team was assaulted while working in Mea She’arim neighborhood in Jerusalem.

Qalqilia: Palestinian was rammed over on the main road near the Al-Funduq village intersection.

Sultan Ziyad Abu Shokri, 32, the supermarket’s owner, said to that:

“At approximately 19:30, while my father and I were in my supermarket located in the center of the village, near Ein Yabrud Old mosque on the village’s main street, I saw a military USV parked 30 meters away my supermarket. After that, a number of Israeli soldiers stepped out of the USV and fired at least 18 teargas canisters at the supermarket. Civilians, who were present in the area, suffocated due teargas inhalation. I immediately got my father out of the supermarket and took him to his vehicle to drive it and go to home. When my father got into the vehicle, an Israeli soldier fired a teargas canister at the vehicle, breaking its rear windows. Additionally, my father suffocated due to teargas inhalation and received treatment on the spot. After that, IOF withdrew from the village and no clashes between Palestinian young men and IOF were reported.” ‘Alian said that IOF was irritated by the citizens’ solidarity with the family cause as they previously raided the tent and attacked those who were inside. They threatened the citizens in case they returned to the tent in solidarity with the family. ‘Alian added that IOF again raided the tent in the dawn and removed it after firing sound bombs randomly to disperse those inside the tent. They also removed the solidarity slogans fixed on the building rubble. It should be noted that ‘Alian family previously stated that the decision to demolish the family building, which was implemented last Monday under the pretext of unlicensed construction, was a political decision par excellence, especially since their son, Fadi, previously received several calls from the Israeli Intelligence threatening him to demolish his family building if he continued to work as the Head of the Guard Unit in the mosque. The family added that Fadi was arrested several times and teased him lately until they demolished the family building which was established more than 10 years ago under the pretext of unlicensed construction.

The following structures were demolished:

The Israeli authorities carried out the demolition without any prior warning, claiming that the citizens built in the same place where the previous dwellings were demolished on 25 November 2020.

Posted by Palestinian Centre for Human Rights on Thursday, March 4, 2021

The center is an independent Palestinian human rights organization (registered as a limited non-profit company) based in Gaza City.