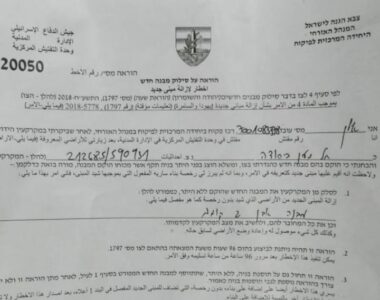 Rateb Jabour, the coordinator of the National and Popular Committees against the Annexation Wall in Hebron, said the soldiers invaded the area after surrounding it and handed the demolition orders.

He added that the army is alleging the homes, built on lands owned by the Palestinians, were constructed without permits from the so-called Civil Administration Office,” the administrative branch of Israel’s illegal occupation.

It is worth mentioning that the area is frequently targeted by the army amidst constant attempts to occupy more Palestinian lands to the construction and expansion of Israel’s illegal colonies.

Last year, Israel demolished dozens of homes, sheds, and other structures in Ma’in area, in addition to frequent attacks carried out by the illegal colonialist settlers.