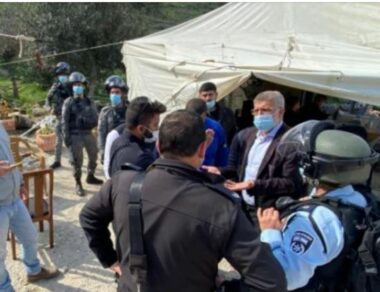 Israeli soldiers demolished, Thursday, a residential tent used by members of Oleyyan family in the al-‘Isawiya town, in the northern part of occupied Jerusalem, in the West Bank, less than two weeks after the army demolished their home.

Eyewitnesses said the soldiers and the police invaded the town, and surrounded the area of the demolished home, before forcing the family out of a tent they installed to shelter themselves and removed it.

It is worth mentioning that a week ago, the army demolished and removed three tents installed by the family near the rubble of their home, on their privately-owned land.

The owner of the building, resident Fadi Oleyyan, who works as a guard of the Al-Aqsa Mosque, said his family’s building did not violate the zoning laws and is included in the Structural Map of the town.