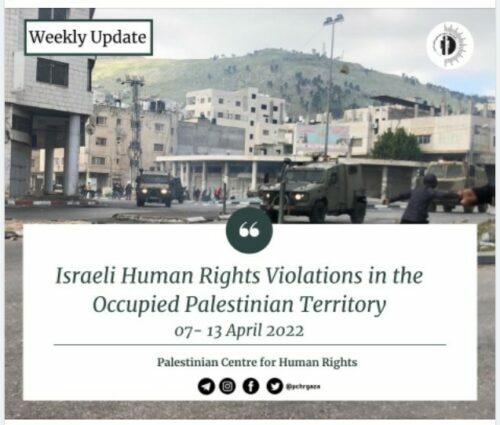 Eight Palestinians, including 2 children and 2 women, were killed, and 48 others, including 6 children, a girl, and 2 who lost their eyes, were wounded by Israeli occupation forces (IOF) fire while tens of others suffocated and sustained bruises in separate incidents in the West Bank, including occupied East Jerusalem, and the Gaza Strip.

On 10 April 2022, a Palestinian woman was shot dead by IOF near an Israeli checkpoint in Husan, western Bethlehem.  More information is available here.  On the same afternoon, IOF killed another woman in Hebron, claiming she stabbed an Israeli soldier near the Ibrahimi Mosque and killed another Palestinian after directly targeting him in al-Khader village, Bethlehem, claiming he threw stones and Molotov Cocktails.  More information is available here.

On 11 April 2022, a child succumbed to wounds he sustained a day earlier in Jenin.  More information is available here.

On 13 April 2022, IOF killed a lawyer without justification while their troops withdrew from Nablus after conducting a widescale incursion in the city, wounding 3 Palestinians, including a child.  More details are available here.

In the afternoon, IOF killed a Palestinian and wounded 6 others during clashes when IOF withdrew from Silwad village in Ramallah.  During the incursion, IOF surrounded 2 houses; one was uninhabited, and opened fire at them, detaining the residents inside and then beating and arresting 3 of them. On the same afternoon, IOF opened fire and killed a child with several bullets in Husan village, western Bethlehem.

They detained his body and took him with them but a few hours later his body was delivered.  IOF claimed that the child was targeted after he was seen trying to throw Molotov Cocktails at a military checkpoint in the area.

Most of them were victims of excessive use of force that accompanied the suppression of peaceful protests and gatherings and they were as follows:

07 April: 4 fishermen were wounded with rubber bullets and then arrested by IOF when the latter chased 2 fishing boats sailing within the allowed fishing area (8 nautical miles) off Rafah shore, southern Gaza Strip.  They were released the next day, but their boats were

confiscated.  Another chase recurred in the same area and IOF arrested 3 other fishermen and confiscated their boat.  A child sustained teargas canister shrapnel wounds in his hand, and another Palestinian was arrested in clashes erupted during IOF’s incursion into al-Am’ari refugee camp in Ramallah.  In the afternoon, IOF again suppressed Palestinians gathered in Bab al-‘Amoud in occupied East Jerusalem and arrested 3 of them, including a child, after assaulting them.

This recurred the next day after setters gathered and chanted slogans against Arabs and Muslim; during which, IOF arrested and severely beat up a Palestinian.

08 April: 3 Palestinians were wounded, including 2 children, with rubber bullets during IOF’s suppression of Kafr Qaddoum weekly protest in Qalqilya.  A Palestinian child lost his eye when IOF directly targeted him with a rubber bullet during their suppression of protesters in northern East Jerusalem.  More details are available here.

IOF wounded 3 Palestinians near Gate 104 near the annexation wall, northern Tulkarm, during their attempt to enter Israel for work.  In the afternoon, a Palestinian was wounded with a rubber bullet in his foot and 2 others were arrested, including a child, during clashes with IOF in Kafr Malek village in Ramallah.

09 April: 13 Palestinians, including a child and a girl, were wounded; 2 sustained serious wounds in clashes during IOF’s incursion into Jenin refugee camp to surround the house of the Palestinian who carried out the shooting in Tel Aviv in Jenin.  The area witnessed clashes between IOF and members of Palestinian armed groups; as a result, one of the latter was killed.  IOF arrested 2 Palestinians; one of them was wounded, and later withdrew.

10 April: a Palestinian was wounded with a bullet in his waist and others suffocated in clashes during IOF’s incursion into Yabad village, Jenin.  IOF arrested 8 Palestinians after raiding their houses and 3 shops, damaging their contents, and later withdrew.

A Palestinian also sustained bullet shrapnel wounds in his hand and 3 others were arrested in similar circumstances in the eastern neighborhood in Jenin.  Another Palestinian was wounded with a bullet in the right thigh in clashes during IOF’s incursion into al-Bireh, northern Ramallah.  Moreover, two Palestinians were arrested in clashes during IOF’s incursion into ‘Aqabet Jaber refugee camp in Jericho.

11 April: a child was wounded with a bullet in his right leg, and 9 Palestinians were arrested, including a national security officer, during IOF’s incursion into Kafr Qalil village and the down suburb adjacent to the village, eastern Nablus.

12 April: IOF wounded 4 Palestinian university students after raiding Khadouri University’s campus in Tulkarm.  In the next day, an Israeli Special Force raided the university in a civilian car and opened fire at a student, visitor, and a security officer whom they arrested after wounding him.  Further information available here.

13 April: 7 Palestinians were wounded, including one in critical condition and another lost his eye by a rubber bullet that penetrated his eye in clashes during IOF’s incursion into Bita village, southeastern Nablus.

Also, IOF wounded a Palestinian near the annexation wall, southern Tulkarm, when they targeted workers in their attempt to infiltrate in order to work in Israel.  In the afternoon, a young man was wounded in his chest with shrapnel of a sound bomb fired by IOF in their incursion into Kobar village, Ramallah.  IOF arrested 4 Palestinians and later withdrew.

So far in 2022, IOF attacks killed 28 Palestinians, including 7 children and 2 women, and wounded 235 others, including 45 children, 2 women, 2 paramedics and 10 journalists: all in the West Bank, except 5 fishermen in the Gaza Strip.

This week, settlers carried out 9 attacks in the West Bank, wounding 6 Palestinians, including 2 with bullets, and damaging many vehicles. The details were as follows:

07 April: setters from “Beit El” settlement, northern al-Bireh, threw stones at the Palestinian car traveling on the main street adjacent to the settlement and leading to al-Jalazone refugee camp.  No injuries were reported.

On the same day, settlers from “Shiloh” settlement, eastern Ramallah, threw stones at the Palestinian cars traveling on Ramallah-Nablus main street.  No injuries were reported.

08 April: 2 Palestinians were wounded with bullets when settlers opened fire at the Palestinian vehicles in Tarmesi’yah village, Ramallah.  IOF’s patrols arrived and took the wounded to an Israeli hospital.

09 April:  a Palestinian sustained wounds in his face when he was working in a kindergarten near his house in the closed Martyrs Street neighborhood in H2 area in Hebron.  Settlers from “al-Daboya” settlement outpost threw a stone at him.  in the afternoon, settlers beat up an elderly when the latter was herding his sheep in al-Hafasi pastoral areas surrounding ‘Inab settlement, eastern Tulkarm.  Also, settlers stormed agricultural lands in ‘Anabta village, eastern Tulkarm, and raised the Israeli flag on the roof an agricultural room.  Settlers also threw stones and sprayed pepper gas at a Palestinian and his wife in an agricultural room in Kafr al-Deek, western Salfit.

So far this year, settlers carried out 95 attacks on Palestinians and their properties in the West Bank.

On 10 April, IOF confiscated a bulldozer and a truck for Palestinians in Tarmesi’yah village, Ramallah.

On 12 April, IOF uprooted 2 tents; one is residential, and the other is for grazing sheep in Kafr Malek in Ramallah, under the pretext of building in an archeological area and within Area C.

Since the beginning of 2022, IOF made 40 families homeless, a total of 244 persons, including 47 women and 113 children. This was the outcome of IOF demolition of 50 houses and 5 residential tents. IOF also demolished 29 other civilian objects, razed 174 dunums and delivered 49 notices of demolition, cease-construction, and evacuation.

IOF carried out 210 incursions into the West Bank, including occupied East Jerusalem. Those incursions included raids and searches of civilian houses and facilities and the establishment of checkpoints. During this week’s incursions, 131 Palestinians were arrested, including 7 children.

On 09 April 2022, Major General Ghassan Alian, head of the Coordinator of Government Activities in the Territories (COGAT), announced collective punitive measures against Jenin, northern West Bank, following the shooting in Tel Aviv carried out by one of the city’s residents.

The announcement published on ‘Alian’s Facebook page says: “following the latest incidents in Jenin and upon the Israeli Defense Minister’s decision: businessmen from Jenin are not allowed to enter Israel, and Arabs in Israel are not allowed (neither in cars nor on feet) to enter or exit via al-Jalbou’a and Barta’a crossings.  Also, the rock rubble will not be transferred via DTD at crossings in Jenin, and due to security concerns, family visitations to Palestinians in Jenin will not be allowed (within the 5000 approved permits)

The Israeli occupation maintains its illegal and inhuman 15-year closure on the Gaza Strip. Details are available in PCHR’s February monthly update on the Gaza crossings.

So far in 2022, IOF established at least 1056 checkpoints and arrested 59 Palestinians at those checkpoints.