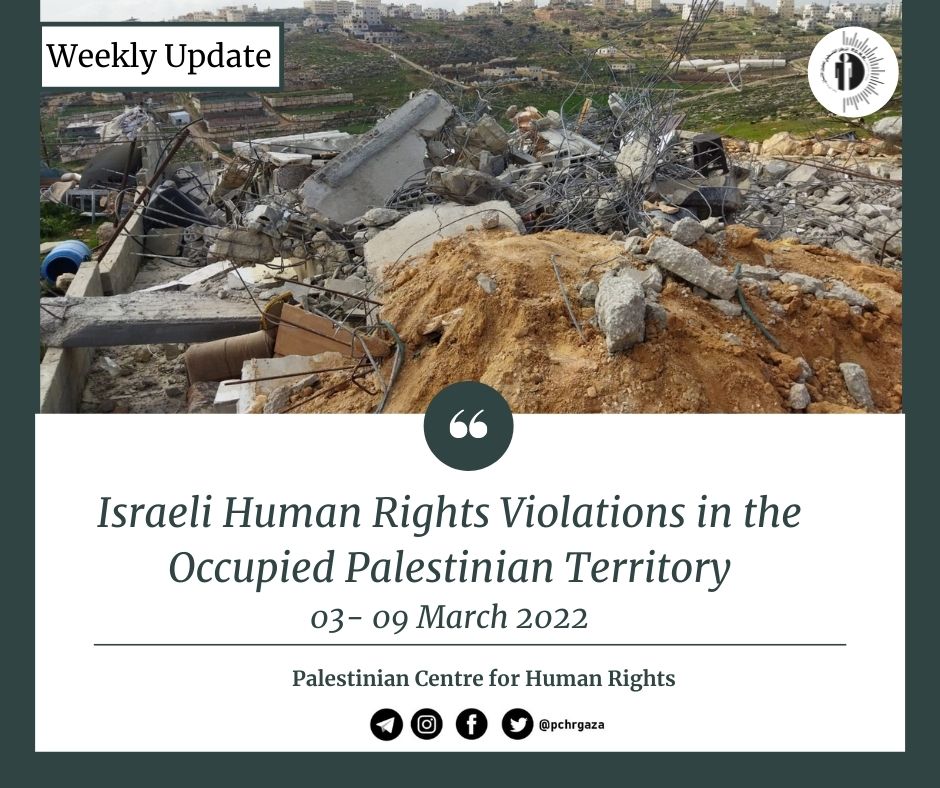 Three Palestinian civilians, including a child, were killed while the fourth succumbed to his wounds, and 16 others, including 2 children, were injured, in addition to tens others suffocated due to teargas inhalation in separate incidents in the West Bank, including occupied East Jerusalem.

“So far in 2022, IOF attacks killed 14 Palestinians, including 3 children, and wounded 120 others, including 23 children, a woman, 9 journalists and 2 medical personnel, all in the West Bank, except one fisherman in the Gaza Strip.”

This week, IOF demolished a commercial facility and 7 civilian objects, including 6 houses, displacing 7 families of 33 individuals, including 15 children and 10 women in the West Bank:

“Since the beginning of 2022, Israeli occupation forces made 40 families homeless, a total of 244 persons, including 47 women and 113 children. This was the outcome of IOF demolition of 50 houses and 4 residential tents. IOF also demolished 29 other civilian objects, and delivered 28 notices of demolition, cease-construction, and evacuation.”

IOF carried out 180 incursions into the West Bank, including occupied East Jerusalem. Those incursions included raids of civilian houses and shootings, enticing fear among civilians, and attacking many of them. During this week’s incursions, 112 Palestinians were arrested, including 22 children and a woman. Also, on 03 March 2022, IOF conducted a limited incursion into eastern Deir al-Balah, while on 07 March 2022, another limited incursions was conducted by IOF in northern Beit Hanoun, north of the Gaza Strip.

“So far this year, settlers carried out 50 attacks on Palestinians and their properties in the West Bank.”

Israeli occupation maintains its illegal and inhuman 15-year closure on the Gaza Strip. Details available in PCHR’s monthly update on the Gaza crossings.

In the West Bank, including occupied East Jerusalem, IOF continues to impose restrictions on the freedom of movement. On top of its 108 permanent checkpoints, IOF established 76 temporary military checkpoints this week and arrested 5 Palestinians at those checkpoints. The majority of the checkpoints were in Hebron (35).

“So far in 2022, IOF established 623 temporary military checkpoints this week and arrested 38 Palestinians at those checkpoints.”