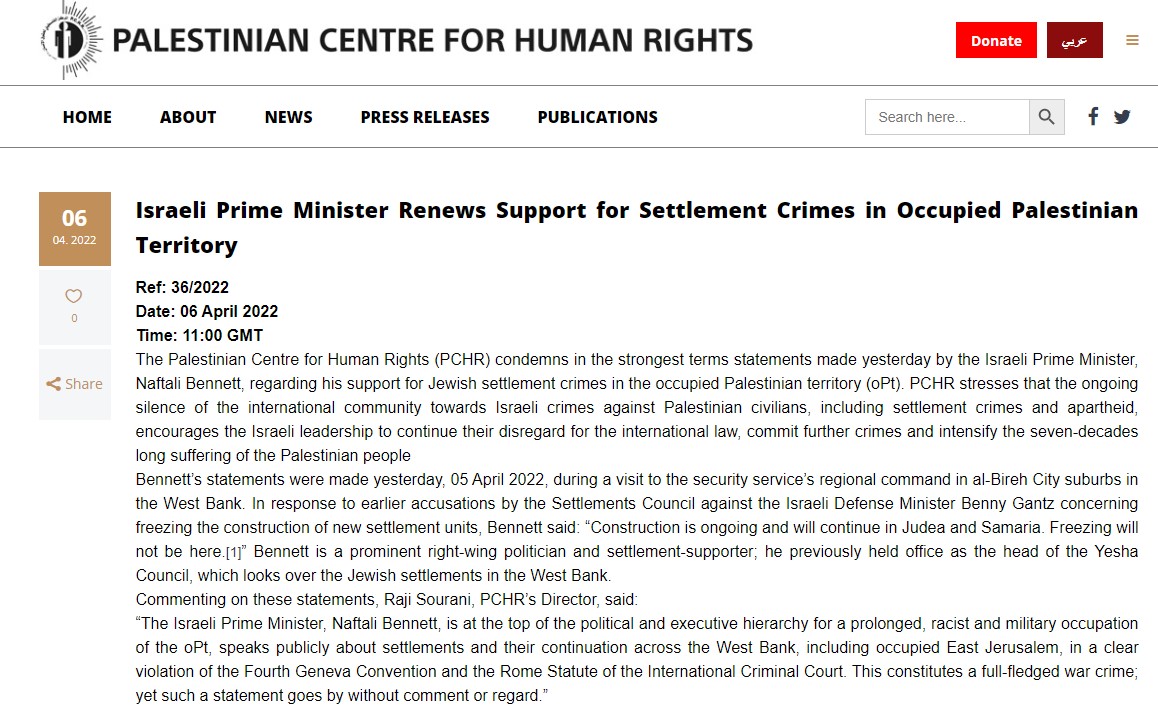 The Palestinian Centre for Human Rights (PCHR) condemns in the strongest terms statements made yesterday by the Israeli Prime Minister, Naftali Bennett, regarding his support for Jewish settlement crimes in the occupied Palestinian territory (oPt).

PCHR stresses that the ongoing silence of the international community towards Israeli crimes against Palestinian civilians, including settlement crimes and apartheid, encourages the Israeli leadership to continue their disregard for international law, commit further crimes and intensify the seven-decades long-suffering of the Palestinian people

Bennett’s statements were made yesterday, 05 April 2022, during a visit to the security service’s regional command in al-Bireh City suburbs in the West Bank. In response to earlier accusations by the Settlements Council against the Israeli Defense Minister Benny Gantz concerning freezing the construction of new settlement units, Bennett said: “Construction is ongoing and will continue in Judea and Samaria. Freezing will not be here.[1]” Bennett is a prominent right-wing politician and settlement supporter; he previously held office as the head of the Yesha Council, which looks over the Jewish settlements in the West Bank.

“The Israeli Prime Minister, Naftali Bennett, is at the top of the political and executive hierarchy for a prolonged, racist, and military occupation of the oPt, speaks publicly about settlements and their continuation across the West Bank, including occupied East Jerusalem, in a clear violation of the Fourth Geneva Convention and the Rome Statute of the International Criminal Court. This constitutes a full-fledged war crime, yet such a statement goes by without comment or regard.”

Sourani criticized the double standard of the international community when applying international law, especially in comparison to the situation in Ukraine.

He added, “Europe and the West promptly acted against the Russian invasion into Ukraine. We stand against any occupation and human suffering is inseparable.  Scenes of destruction and death in Ukraine are no different than those in Gaza.  Forced displacement of civilians in Ukraine is no different than the forced displacement that happened to Palestinians since the 1948 Nakba when Israel uprooted hundreds of thousands of Palestinian civilians and expelled them from their houses.

This happened as well when hundreds of thousands of civilians were forcibly displaced during IOF’s bloody offensives on the Gaza Strip that inflicted thousands of deaths and injuries while the international community turned a blind eye.”

The Israeli occupation has entrenched an apartheid regime all over the territory which is under its control from the river to the sea in light of international silence and absence of political will to take real action in order to stop these continuous crimes against the Palestinians and despite tens of international resolutions issued by the UN Security Council and General Assembly, which condemns such crimes.

PCHR reiterates its call upon the international community to adopt one single standard when dealing with international causes and to activate international accountability when facing Israel’s denial and brazen defiance of international law, including the 1949 Fourth Geneva Convention and Rome Statute of the International Criminal Court.