PCHR: “On 72nd Great March of Return: 94 Civilians Injured, including 25 Children, a Woman, 2 Journalists and 2 Paramedics by Israeli forces” 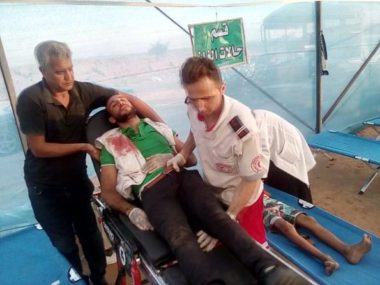 Comprehensive Report by the Palestinian Center for Human Rights (PCHR): On 72nd Great March of Return, 94 civilians injured as a result of the Israeli military’s continued use of excessive force against peaceful protests along the Gaza Strip’s eastern border; 25 children, a woman, 2 journalists and 2 paramedics were among those injured this Friday, 30 August 2019.

Despite the decrease in the number of injuries among this week’s protestors, in comparison to last Friday, Israeli forces continued to exercise excessive force against Palestinians with the use of live ammunition and targeting the upper part of protestors’ bodies as PCHR recorded 46 injuries with live bullets this week, one deemed extremely critical.

The Supreme National Authority of Great March of Return and Breaking called for today’s protests under the slogan “In Commemoration of Our Martyrs,” as Palestinians commemorated the 5th anniversary of the 2014 Israeli offensive against the Gaza Strip.

The protests lasted from 15:00 to 19:00 and involved activities such as speeches by political leaders and theatrical performances. Dozens of civilians protested at varied distances from the border fence across the Gaza Strip. 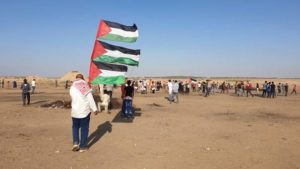 The protestors threw stones and firecrackers at Israeli forces, well-shielded hundreds of meters away; the latter responded with excessive force.

To this date, PCHR documented 208 killings by Israel since the outbreak of the protests on 30 March 2018, including 44 children, 2 women, 9 persons with disabilities, 4 paramedics and 2 journalists.

Additionally, 13,728 were wounded, including 2,886 children, 420 women, 231 paramedics and 212 journalists, noting that many had sustained multiple wounds on multiple occasions.

Hundreds of protestors approached the border fence and threw stones at Israeli soldiers, who responded with live and rubber bullets and tear gas canisters at them. As a result, 30 civilians were injured, including 12 children and a Palestinian Red Crescent Society (PRCS) photojournalist: 21 shot with live bullets and their shrapnel; 4 with tear gas canisters; and 5 with rubber bullets. The wounded photojournalist, Ibrahim Nasser Hussain Abu-Marsa (26), was shot in the back with a rubber bullet. 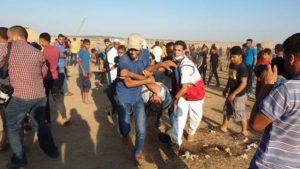 Gaza City: Hundreds of protestors took part in eastern Malakah area. Speeches, theatrical performances and other segments were performed at the protest central encampment. Dozens of protestors approached the fence at a 100 meters distance and threw stones with slingshots at Israeli soldiers.

Central Gaza: Hundreds of civilians, including women, children and families, took part in the eastern Bureij refugee camp protests; hundreds, including women and children, gathered adjacent to the border fence at a range varying between 2 – 70 meters.

The Israeli soldiers, reinforced with 9 military SUVs, launched a drone to photograph protestors who had thrown rocks and sound bombs at the military SUVs and shot them with live and rubber bullets in addition to teargas canisters. As a result, 10 civilians, including 2 children, were wounded: 7 with live bullets, 1 shot with rubber bullets and 2 directly hit with tear gas canisters. Before protests were concluded, Israeli forces arrested 3 young men after crossing the border at approximately 19:00. PCHR is working to obtain their names.

Khan Younis: hundreds participated in Khuza’ah protests. Tens approached the border fence and attempted to throw stones, and firecrackers and raised Palestinian flags in addition to chanting national songs. Israeli forces fired live and rubber bullets and tear gas canisters at protesters, wounding 20 civilians, including 10 children: 5 with live bullet and their shrapnel; 10 with rubber bullets; and 5 with tear gas canisters.

Also, paramedics were heavily targeted with tear gas canisters while vacating one of the wounded resulting in severe suffocation among them. Bader Nabil Suliman Abu-Mousa (24) was critically wounded with a live bullet to the head while present 70 meters away from the border. 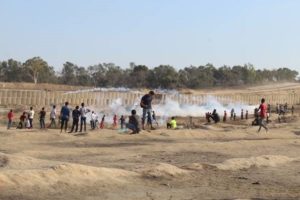 Rafah: hundreds participated in the eastern Shokah protests, where folklore shows, and speeches were held. Palestinian Minitry of Health honored Izz-al-Deen Samsoum (12) for volunteering with the medical crews during last week’s protest, and photojournalist Hidra al-Sharif who captured Samsoum in action.

Dozens approached the border fence and threw stones at the shielded Israeli soldiers, who responded with live and rubber bullets and teargas canisters against the protestors.

As a result, 27 civilians were injured, including 7 children and a PRCS paramedic. It was documented that 10 were hit with live bullets and their shrapnel, 14 were hit with rubber bullets and 3 were directly hit with tear gas canisters. The wounded paramedic was identified as: Ashraf Shafiq Hussain al-Khatib (41), shot in the back with a rubber bullet.