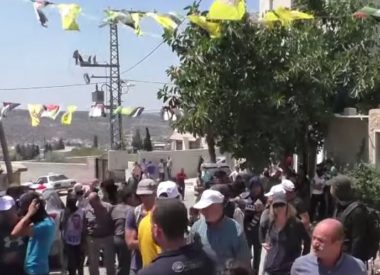 The Popular Committee against the Annexation Wall and Colonies in Kufur Qaddoum said the soldiers tried to ambush the Palestinians by hiding in an under-construction home to use it as a firing post, but the protesters uncovered their hideout, and started throwing stones at them.

It added that, after the hideout was discovered, many army jeeps invaded the town, and the soldiers started firing dozens of live rounds, rubber-coated steel bullets and gas bombs at the protesters. d the escalating Israeli violation will only lead to further determination and steadfastness among the Palestinians who are ongoing with their processions, rejecting this illegal occupation, its colonies and polices targeting them, their homes and lands.

It added that the army has recently escalated its invasions into the town, and carried out violent searches of homes, in addition to abducting many Palestinians, in an attempt to stop the processions, but affirmed that the Palestinians will continue their struggle to achieve their legitimate rights.