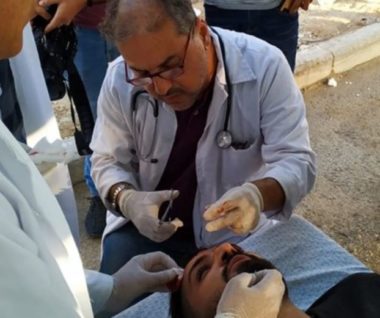 The Palestinian Health Ministry in the Gaza Strip has reported that Israeli soldiers injured, during the Great Return Procession in the Gaza Strip, Friday, 72 Palestinians, including 30 who were shot with live ammunition, in addition to a journalist and a medic, in various parts of the coastal region.

Thousands of Palestinians gathered along the eastern parts of the Gaza Strip, in Rafah and Khan Younis in southern Gaza, al-Boreij in central Gaza, Gaza city, in addition to Jabalia in northern Gaza.

Dozens of Israeli soldiers, including sharpshooters, were deployed across the perimeter fence in their fortified make-shift camps and sniper posts, and attacked the protesters with live rounds, high-velocity gas bombs and rubber-coated steel bullets, especially near Rafah and Khan Younis.

The Palestinian Health Ministry in Gaza said medical teams provided treatment to 72 Palestinians, including 30 who were shot with live rounds, and added that among the injured Palestinians are one medic and one journalist.

In addition, the Israeli army said some protesters flew flammable balloons during the processions and added that a fire broke out in a filed across the perimeter fence.