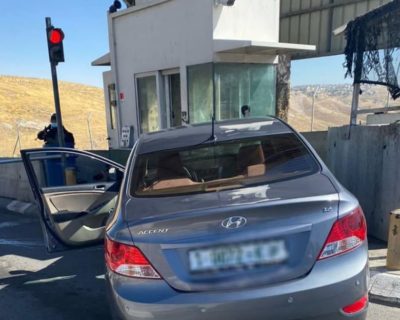 On Tuesday, 23 June 2020, Israeli forces killed a Palestinian civilian after opening fire at his vehicle, which collided into the traffic island in the center of al-container military checkpoint, east of Bethlehem. The military claimed that the victim attempted to carry out a run-over attack, but according to the information collected by the Palestinian Centre for Human Rights (PCHR) the victim was in fact en route to pick up his mother, in preparation for his sister’s wedding, which was supposed to be held in the evening in Abu Dis village.

The Palestinian Center for Human Rights (PCHR) stresses that the Israeli military used disproportionate force, especially considering the fact that the victim posed no real threat to the soldiers’ lives in light of the heavy fortifications at the checkpoint. This incident is yet another example of Israel’s systemic policy of shooting Palestinian civilians in a direct manner and as an immediate reaction.

According to PCHR’s investigations and eyewitnesses’ testimonies, at approximately 15:53 on Tuesday, Ahmad Mustafa Erekat (26), from Abu Dis village in occupied East Jerusalem, was waiting in queue at al-container military checkpoint in eastern Bethlehem, to cross into Bethlehem where he was supposed to pick up his mother and sisters from a beauty salon in the city and return to Abu Dis village to attend his sister, Eman’s wedding.

At approximately 15:55, when Erekat’s vehicle approached the checkpoint, it deviated from its path and collided into the traffic island opposite the glass room where Israeli border guard soldiers were stationed. The soldiers immediately opened fire at the vehicle, wounding Erekat with several live bullets in his upper body. They pulled him out of the vehicle, threw him on the ground and prevented the Palestinian Red Crescent Society (PRCS) medical crew from approaching him or providing first aid; leaving him to bleed to his death at the checkpoint.

It should be noted that the “container” military checkpoint separates villages located in south-eastern occupied East Jerusalem from eastern Bethlehem. Following the incident, Israeli forces closed the checkpoint, fired a barrage of tear-gas canisters, and denied vehicles’ access to the city, causing a traffic jam.

Israeli police justified the execution of Ahmad Erekat alleging a suspected car-ramming attack, as the statement read “a speeding Palestinian vehicle arrived at al-container crossing in the eastern Sawahra in Benjamin area; the driver drove his vehicle quickly towards the direction of a female border police officer who was injured lightly. Border police officers opened fire and neutralized the driver. Medical crews declared him dead.”

It should be noted that Ahmad Erekat is a member at Abu Dis village’s Youth Council, and he was a popular and well-known person in his community. According to Erekat’s relatives, he was excited to attend his sister’s wedding, which was scheduled to be held in the Royal Hall in the village that night, and he himself was set to get married next month, having postponed the ceremony due to the corona virus pandemic.

PCHR strongly condemns the murder of the young Palestinian, which reflects a clear disregard for the lives of Palestinian civilians who are shot with the intent to kill them on grounds of suspicion, without any threat present to the lives of Israeli soldiers.

PCHR also condemns Israeli forces failure to provide medical aid, denying Palestinian medical crews from access to the victim and leaving him to bleed to death, which constitutes a violation of the rules of international humanitarian law (IHL).

PCHR also calls upon the international community to immediately take action to stop similar Israeli crimes and reiterates its calls upon the High Contracting Parties to the 1949 Fourth Geneva Convention to fulfill their obligations under Article 1; i.e., to respect and ensure respect for the Convention in all circumstances.

PCHR also calls upon the High Contracting Parties to fulfill their obligations under Article 146; i.e., to prosecute persons alleged to commit grave breaches of the Fourth Geneva Convention, noting that these violations constitute war crimes according to Article 147 of the same Convention, and Additional Protocol (I) to the Geneva Conventions, regarding the guarantee of Palestinian civilians’ right to protection in the occupied territories.