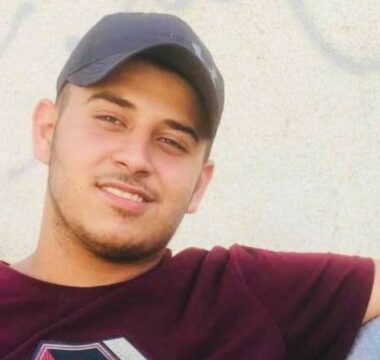 This morning, Israeli Occupation Forces (IOF) killed a Palestinian civilian during the suppression of protests after IOF raided Qabatia village, southeast of Jenin in the West Bank.

This crime, which is the second of its kind this week, reflects IOF’s loose shooting standards and excessive use of armed force against Palestinians despite no imminent threat or danger to IOF’s lives.

According to investigations conducted by the Palestinian Centre for Human Rights (PCHR), at approximately 06:00 on Monday, 05 September 2022, IOF moved into Qabatia village, southeast of Jenin, as citizens gathered and threw stones and empty bottles at IOF and clashes broke out.

Immediately, IOF fired live bullets, rubber-coated bullets, stun grenades and tear gas canisters at the Palestinian protesters. As a result, Taher Mohammad Taher Zakarna (19) was hit with a live bullet in his head and then taken to Al-Razi Hospital in Jenin in critical condition.

At approximately 08:30, the doctors announced his death due to his serious injury.

According to field investigations, Zakarna was wounded when he was 80 to 90 meters away from the IOF, posing no imminent danger or threat to the soldiers’ lives.

Later on, IOF withdrew after arresting and taking 2 Palestinians with them.

So far in 2022, IOF attacks killed 113 Palestinians, including 82 civilians: 24 children, 8 women, 2 Palestinians killed by Israeli settlers and the rest were activists; 15 of them were assassinated. Moreover, hundreds of others sustained wounds, including women and children, across the West Bank, including occupied East Jerusalem.

PCHR reiterates its call upon the international community to take immediate action to end Israeli occupation’s crimes and double standards when it comes to international law.

PCHR also urges the ICC Prosecutor in particular to act seriously with regard to the situation in Palestine similar to its prompt action in Ukraine.

PCHR also demands the High Contracting Parties to the Fourth Geneva Convention fulfil their obligations as per Article 1 of the Convention, “undertake to respect and to ensure respect for the present Convention in all circumstances.”

PCHR also calls upon the High Contracting Parties to fulfill their obligation under Article 146 of the same Conventions, i.e., to hold accountable persons accused of committing grave breaches of the Convention, and to ensure protection for Palestinian civilians in the occupied territory.