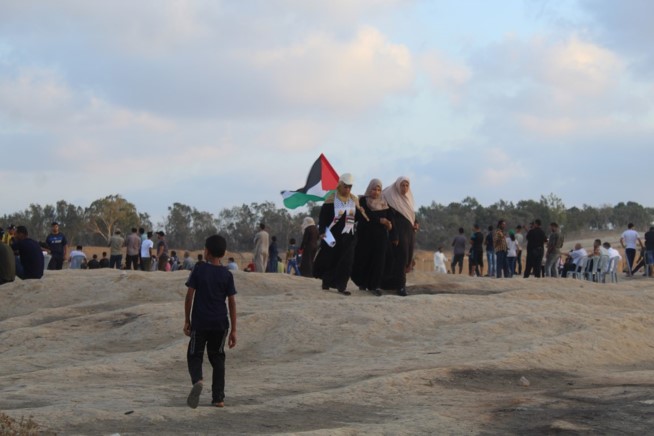 On 74th Friday of Great March of Return, 75 civilians were injured as a result of the Israeli military’s continued use of excessive force against peaceful protests along the Gaza Strip’s eastern border; 34 children, 1 woman and 1 journalist, were among those injured this Friday, 13 September 2019.

Israel’s military has been put on high alert along the Gaza border as the Israeli Prime Minister, Benjamin Netanyahu, threatened to launch a military operation against the Gaza Strip at any time.

According to Israeli reports, Israeli military reinforced its presence along the Gaza borders, along with the use of the ‘Iron Dome Missile Defence’ in several nearby cities and villages.

The Supreme National Authority of Great March of Return and Breaking the Siege called for today’s protests, which coincided with the 26th anniversary of the Oslo Accords between Israel and the Palestinian Liberation Organization (PLO), under the slogan “Erase the Oslo Accords from Our History.” The protests lasted from 15:00 to 19:00 and involved activities such as speeches by political leaders and theatrical performances.

Thousands of civilians protested at varied distances from the border fence across the Gaza Strip. The protestors threw stones, Molotov Cocktails and firecrackers at the Israeli forces, while the latter, well-shielded hundreds of meters away, responded with excessive force. As a result, dozens of civilians sustained bullet injuries while others suffocated due to tear gas inhalation.

PCHR has documented 211 killings by Israel since the outbreak of the protests on 30 March 2018, including 46 children, 2 women, 9 persons with disabilities, 4 paramedics and 2 journalists. Additionally, 13,854 were wounded, including 2,959 children, 423 women, 233 paramedics and 214 journalists, noting that many of those injured had sustained multiple injuries on separate occasions.

Approximately 1,000 civilians participated in Abu Safiyah area protests, northeast of Jabalia. Speeches, theatrical performances and other segments were performed at the protest central encampment. Dozens of protestors approached the border fence and threw stones at Israeli soldiers, who responded with live and rubber bullets and tear gas canisters. As a result, 15 civilians injured, including 5 children: 6 were shot with live bullets and their shrapnel; 3 were hit with tear gas canisters; and 6 were shot with rubber bullets. Ahmed Mahmoud Abdul Men’em Manoun, 21, sustained serious live bullet wounds in his left leg with damage to bones, veins and tendons.

Hundreds of protestors took part in eastern Malakah area. Speeches, theatrical performances and other segments were performed at the protest central encampment. Dozens of protestors approached the fence and threw stones with slingshots at Israeli soldiers. The soldiers fired live and rubber bullets and tear gas canisters at the protestors. As a result, 11 civilians injured, including 5 children: 5 were shot with live bullets and their shrapnel; 4 were shot with rubber bullets and 2 were directly hit with tear gas canisters.

At approximately 15:00, hundreds of civilians, including women and children, took part in the eastern Bureij refugee camp protests; dozens gathered adjacent to the border fence at a range varying between 3 – 300 meters. The Israeli soldiers launched a drone to photograph protestors who had set tires on fire and thrown stones and sound bombs near the borders; also, they shot them with live and rubber bullets and teargas canisters. As a result, 28 civilians were injured, including 14 children and 1 journalist: 13 were shot with live bullets and their shrapnel; 9 with rubber bullets and 6 with tear gas canisters. The wounded freelance journalist, Zakaria Rawhi Bkair, 24, from al-Maghazi, was hit with a rubber bullet to the left hand.

Hundreds of Palestinians participated in Khuza’ah protests. Some approached the border fence, set tires on fire, attempted to throw stones and firecrackers and raised Palestinian flags in addition to chanting national songs. Israeli forces fired live and rubber bullets and tear gas canisters at protesters, wounding 5 civilians, including 2 children and 1 woman and they were transferred to local hospitals: 1 was hit with shrapnel; 2 were shot with rubber bullets and 2 were directly hit with tear gas canisters. Moreover, 13 civilians, sustained minor wounds after being hit with tear gas canister and rubber bullets and they received medical treatment on the spot. The wounded woman, Sabreen Ismail Ibrahim al-Najjar, 42, sustained minor wounds after being hit with a rubber bullet to the head. Sabreen was also previously injured on 16 August 2019.

Hundreds participated in the eastern Shokah protests, where folklore songs and speeches were held. Dozens approached the border fence and threw stones at the shielded Israeli soldiers, who responded with live and rubber bullets and teargas canisters in addition to pumping wastewater at the protestors. As a result, 16 civilians injured, including 8 children; one child deemed in extremely critical condition: 10 were shot with live bullets and their shrapnel and 6 were shot with rubber bullets. Ahmed Naji Sa’ed Abu Qamar, 17, sustained serious wounds after being shot with a live bullet in the head. 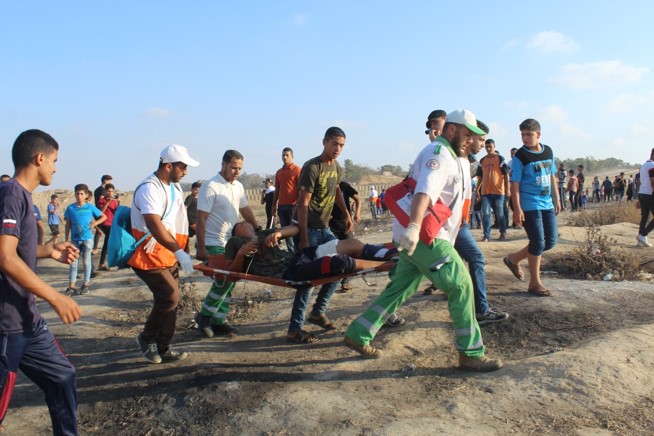 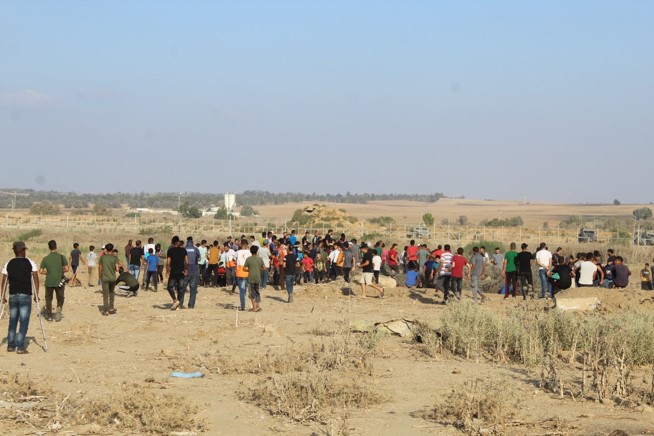