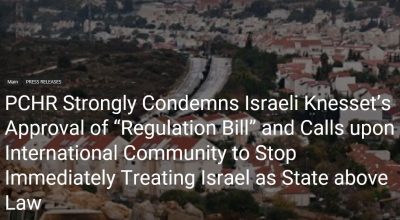 The Palestinian Center for Human Rights (PCHR) strongly condemns the Israeli Knesset’s approval of the “Settlement Regulation Bill”, which allows the theft of Palestinian privately owned lands for the interest of settlement expansion in the West Bank, including East Jerusalem.

PCHR calls upon the international community, particularly the Permanent Members of the UN Security Council (UNSC) and High Contracting Parties to the 1949 Fourth Geneva Convention relevant to the Protection of Civilian Persons in Time of War, to fulfill their legal and moral obligations stipulated in the UN Charter and the mentioned Convention, and to take all deterrent measures against the Israeli Government on grounds of its blatant violations in the occupied Palestinian territory (oPt) in addition to stop treating Israel as a State above the law.

After only few weeks of the UNSC’s Resolution No. 2234 On 23 December 2016,with the adoption of 14 Members and the United States abstaining, that the Israeli settlements have no legal validity, the Israeli Knesset approved in the second and third readings the “Regulation Bill”.

The Resolution reaffirmed that the Israeli settlements established on the Palestinian lands occupied since 1967, including East Jerusalem, has no legal validity according to the intentional law. The Resolution also reiterates its call upon Israel, as the occupying power, to stop immediately and completely all settlement activities in the oPt, including East Jerusalem, and to fully respect all its relevant legal obligations.

Putting forward the above-mentioned Bill, which was adopted by 60 Members and opposed by 52 in the Knesset, came after the Israeli Supreme Court’s decision to evacuate “‘Amouna” settlement established on Palestinian privately owned lands in Silwad, northeast of Ramallah.

This Bill aims at transferring 12 settlement outposts, where around 4,000 settlement units are established, into new settlements and paving the way for the annexation of Areas C, which is around 62% of the total West Bank area.

This Bill also aims at legalizing theft of Palestinian private lands for the interest of settlement projects.

Approval of the “Regulation Bill” came also after months of the election of Israel’s UN Ambassador, Danny Danon, as Chair of the UN General Assembly’s Legal Affairs Committee, in June 2016, with the support of 109 State Members out of 193 States.

PCHR believed at time that Chairing Israel on this Committee would encourage Israel to continue to commit blatant violations of the intentional law rules and even the conventions by the Committee itself.

In light of the above mentioned, PCHR:

1. After welcoming the UNSC’s Resolution No. 2234 on the Israeli Settlement in the oPt and considering it is a significant resolution that has been long waited for, PCHR reiterates its call for an immediate and effective international action to restore confidence in the rule of the law and put an end to the prolonged Israeli challenge and denial of the international law and to the inherent impunity enjoyed by Israel for decades;

2. Calls upon the UN, particularly the UNSC and General Assembly, to take practical measures to face Israel’s blatant violation of the international law rules and to put an end to treating Israel as a State above the law.

3. Calls upon the High Contracting Parties to the Fourth Geneva Convention to fulfill their legal obligations through taking measures to guarantee Israel’s respect for the convention and

4. Hopes that the International Criminal Court (ICC) would positively move towards opening a criminal investigation into the situation in Palestine in general and the settlement file in particular as soon as possible.