Palestinians Call for Boycott of Hyundai 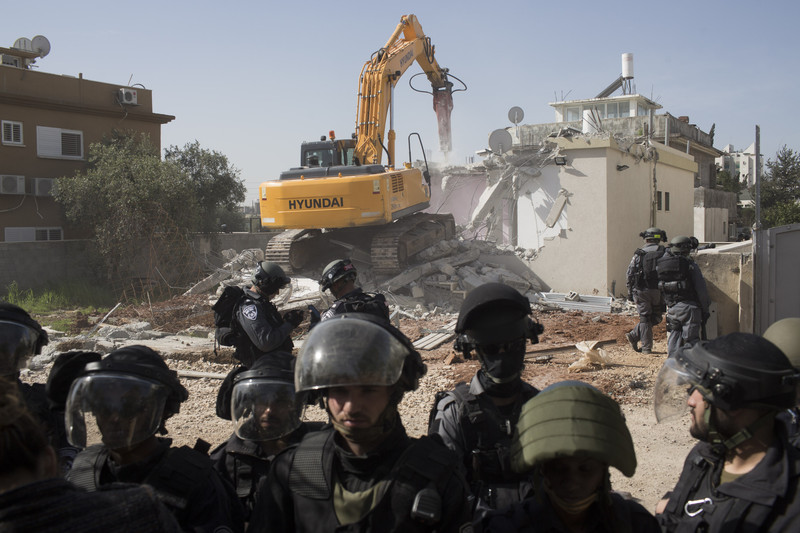 Israeli authorities use a Hyundai bulldozer to destroy the home of a Palestinian citizen of Israel in the town of Lydd, Feb. 10, 2015. The house belonged to a single mother and her four children. (Oren Ziv, ActiveStills)

Via the Palestinian BDS National Committee.

Palestinians are calling for a boycott of Hyundai over the company’s failure to stop its construction equipment being used by Israel to destroy their homes and communities.

“The Boycott, Divestment and Sanctions Committee of Palestinian Citizens of Israel (BDS48) calls upon our Palestinian people in the homeland and the Diaspora, the peoples of the Arab world, and people of conscience worldwide to boycott and divest from Hyundai Heavy Industries (HHI), until it ends its involvement in Israel’s violations of our human rights, particularly in Jerusalem and the Naqab (Negev),” said an action alert released on Tuesday.

The alert calls on people around the world “to boycott Hyundai products” and urges institutions, including investment funds and churches, to divest from Hyundai shares.

While Israel’s abuse of the South Korean company’s products has been documented for years, BDS48 says the campaign comes “at this particular moment in light of the extensive use of Hyundai equipment by the Israeli authorities in the recent demolitions” of many homes of Palestinian citizens of Israel in the Bedouin village of Umm al-Hiran in the southern Naqab region, and in the town of Qalansawa further north, last month.

Another wave of demolitions in Umm al-Hiran is expected imminently, part of Israel’s plan to destroy the community and replace it with a town for Jews, to be called “Hiran.”

In December, Israel also used Hyundai equipment to demolish a home in the occupied Golan Heights.

The BDS48 action alert, which was disseminated by the Palestinian Boycott, Divestment and Sanctions National Committee (BNC), notes that Hyundai has been presented with evidence of its “persistent complicity in Israeli ethnic cleansing policies against Palestinians and Syrians in the territories occupied since 1967.”

But, the company “has failed to stop its business-as-usual involvement,” the alert states.

Hyundai “has thus forfeited its responsibilities as stated in the UN Global Compact and the UN Guiding Principles on Business and Human Rights” – standards that are supposed to promote sustainable development and halt corporate complicity in state abuses.

Until the early 2000s, Hyundai was a single group encompassing such activities as vehicle production, shipbuilding, construction, steel, finance, retail, aerospace and defense.

It was broken up into five major companies, including Hyundai Heavy Industries, which makes ships and construction equipment, and Hyundai Motor Group.

But, all the companies continue to be controlled by a few members of the founding Chung family as part of a complex web of entities.

All the spin-offs trade on the goodwill of the famous Hyundai name, a brand that risks being tarnished by association with Israel’s crimes.

Consumers around the world would be most familiar with cars made by Hyundai Motor Group and its affiliate Kia.

In recent years, Hyundai has shot into the world’s top five automakers.

It is a popular brand in Middle East countries, with Saudi Arabia accounting for more than 40 percent of its regional sales.

In 2016, Hyundai saw its first dip in auto sales in almost two decades. Its workers have also staged widespread strikes over wages.

The BDS48 action alert urges Hyundai workers and the Korean Confederation of Trade Unions “to stand in solidarity with our peaceful struggle by pressuring the Hyundai management to stop the company’s complicity in Israeli violations of human rights.”

“Our campaign is not intended at all to harm the interests of the company’s workers but to protect the rights of our people as stipulated in international law,” it states.