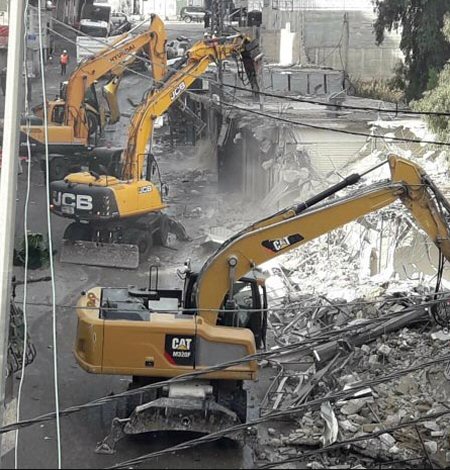 Israeli forces continued with systematic crimes, in the occupied Palestinian territory (oPt), for the week of 14 – 21 November, 2018.

Israeli forces killed a fisherman and continued to use excessive force against unarmed civilians and peaceful protestors in the Gaza Strip. 113 civilians, including 25 children, 3 women, 3 journalists, and 6 paramedics were wounded.

The Israeli forces continued to use lethal force against the participants in the peaceful protests organized within the activities of the “Great March of Return and Breaking the Siege” in the Gaza Strip, which witnessed for the 34th week in a row peaceful demonstrations along the eastern and northern Gaza Strip border area.  During the reporting period, the Israeli forces killed a Palestinian fisherman and wounded 115 civilians, including 25 children, 3 women, 3 journalists and 6 paramedics.  Meanwhile in the West Bank, Israeli forces 15 Palestinian civilians, including 2 children and a journalist.

in the Gaza Strip, on 14 November 20188, Israeli forces killed Nawwaf al-‘Attar (23) when the Israeli soldiers opened fire at a group of fishermen near “Zikim” Military Base along the coastal border fence of the northern Gaza Strip.  As a result, he was hit with a bullet to the pelvis and died.  It should be mentioned that a group of amateur fishermen gathered for fishing in that area using nets that are known for catching mullets in their season which coincides this time of the year.

As part of using excessive force against the peaceful protests along the Gaza Strip borders, during the reporting period, the Israeli forces wounded 113 civilians, including 25 children, 3 women, 3 journalists and 6 paramedics.

As part of targeting the Palestinian fishermen in the sea, the Israeli forces continued to escalate their attacks against the Palestinian fishermen, indicating the on-going Israeli policy to target their livelihoods.  During the reporting period in addition to the abovementioned incident that resulted in the killing of one fisherman, PCHR documented 6 other incidents.

As part of targeting the border areas on 14 November 2018, Israeli forces stationed along the border fence between the Gaza Strip and Israel, northwest of Beit Lahia wounded Taher Matter (22) and arrested him.

On 17 November 2018, Israeli soldiers stationed along the border fence between the Gaza Strip and Israel, east of al-Bureij, opened fire at a 28-year-old man when he was on Jakar Street.  As a result, he was hit with a bullet to his lower limbs.

On 18 November 2018, Israeli soldiers stationed along the border fence between the Gaza Strip and Israel opened fire at the agricultural lands, eat of Johr al-Deek village.  However, no casualties were reported.

In the West Bank, during the reporting period, Israeli forces wounded 15 Palestinian civilians, including 2 children and a journalist, in separate shooting incidents.  The injury of one of those wounded was reported serious.

During the reporting period, Israeli forces conducted at least 81 military incursions into Palestinian communities in the West Bank and 4 similar ones into Jerusalem and its suburbs. During those incursions, Israeli forces arrested at least 48 Palestinians, including 10 children and the PLC Member for the Change and Reform Bloc, Ahmed ‘Atoun (50), who was arrested from his house in al-Bireh.  It should be mentioned that ‘Atoun was forcibly expelled him from his home in Jerusalem to Ramallah on 06 December 2011. Moreover, 22 other civilians were arrested, including 6 children and a woman, in occupied Jerusalem and its suburbs.

As part of the Israeli house demolitions and notices, on 19 November 2018, the Israeli municipality bulldozers levelled a plot of land belonging to Khaled al-Zeer in al-‘Abbasiyah neighbourhood in Silwan, south of Jerusalem’s Old City, claiming that the land is classifie within the green areas.  It should be mentioned that the Israeli Nature and Antiquities Authorities and the muncpality attempt to seize this 16-dunum land, claiming there are antiquities in it in addition to their plans to establish national parks.

On the same day, Israeli municipality bulldozers demolished 2 residential rooms, a cafeteria, and a storehouse built of steel and shed cloth, 2 carwashes, and a grocery store in al-Mukaber Mount, south of occupied East Jerusalem, under the pretext of building without a license.  They also demolished a mobile house donated by the EU in Qalendia village, north of the city.

On 21 November 2018, Israeli municipality staff accompanied with dozens of vehicles and bulldozers moved into Sho’afat refugee camp, north of occupied East Jerusalem.  They destroyed 19 shops, which support 60 families on the main street of the refugee camp under the pretext of building without a license.  Eyewitnesses said that the bulldozers demolished 3 gas station and 16 shops; restaurants, a bakery, clothes stores, shoes stores, and barbershops.) The eyewitnesses added that the Israeli authorities fixed demolition notices to the stores in the late afternoon of the day before and gave the shops’ owners 12 hours to take out their goods.

As part of the Israeli house demolitions and demolition notices, on 21 November 2018, Israeli forces demolished a 50-square-meter tin-roofed agricultural house built of cement and bricks in al-Marajem area, east of Douma village, south east of Nablus.  The house belonged to Sari Dawabshah.  They also demolished retaining walls of bricks “stone chains” established around the house under the pretext of unlicensed building in Area C.

As part of the Israeli settlers’ attacks against the Palestinians civilians and their property, during the reporting period, PCHR’s fieldworkers in the West Bank documented 4 incidents carried out by settlers.  As a result of those attacks, a PRCS ambulance sustained severe damage in addition to another civilian car parked in front of its owner’s house.

In the Thirty-fourth week of the March of Return and Breaking Siege activities, Israeli forces wounded 113 civilians, including 25 children, 3 women, 3 journalists and 6 paramedics. Doctors classified 3 civilian’s injuries as serious. The incidents were as follows:

The Wounded journalists were identified as:

Efforts to Create a Jewish majority

Head of the International Federation of  Journalists, Felib Lourth, said to media that the demonstration was fully peaceful and the Israeli forces attacked it. He added that: ” I has been working in press since many years and I did not expose to such tear gas canisters that fired by the Israeli forces at us, they could disperse us from the area. He added: ” they afraid of press and this a clear message from the Israeli forces to the whole world that they did not care to the freedom of press.

According to PCHR’s investigations, at approximately 08:00 on the abovementioned day, hundreds of Israeli soldiers moved into Sho’afat refugee camp and deployed along the main street, closing off the checkpoint and preventing vehicles and buses from entering and leaving the camp via “Ras al-Khamis” gate.  The soldiers also closed the vicinity of the rubble with iron barriers and red tapes, obstructing life in the refugee camp all day long due to the demolition.  Eyewitnesses said that the bulldozers demolished 3 gas stations and 16 shops (restaurants, a bakery, clothes stores, shoes stores, and barbershops) that support 60 families. The eyewitnesses added that the Israeli authorities fixed demolition notices to the stores in the late afternoon of the day before and gave the shops’ owners 12 hours to take out their goods.  Next day morning, the Israeli forces in large number accompanied with bulldozers starting demolishing all the shops and then unloaded the rubble in special trucks.  It should be noted that the Israeli forces arrested 4 children from the camp during the demolition and referred them to “‘Atarout” police station, north of Jerusalem.  Those arrested were identified as Mohammed ‘Issam al-Qawasmi (16), Ra’ed al-Rajabi (15); Mahmoud Daghmah (15); and Ahmed Hadib (16).

On Sunday, 18 November 2018, the Israeli Supreme Court rejected the request of al-Sabbagh Family to allow them to appeal a decision to expel the family from their house in ” Karem al-Ja’ouni” area in al-Shaiekh Jarrah neighborhood, north of occupied East Jerusalem’s Old City. The court refused to discuss the ownership of the building, where the family live, and refused the appeal because the statute of limitations had expired. This means that around 40 members of the family, including 30 children and an infant, will forcibly leave their houses. It should be noted that al-Sabbgh family building is located on a plot of land, which is targeted by the Israeli authorities and includes 29 buildings sheltering over 100 families since 1950s. The Israeli authorities seek to evacuate it as a prelude to build a settlement neighborhood in the largest displacement operation witnessed by occupied Jerusalem since its occupation in 1967.  Thus, rejecting the appeal would affect tens of Palestinian families who are threatened of expulsion in “Karm al-Ja’ouni” area, including al-Sabbagh family, who filed the appeal.  Al-Sabbagh family has lived in al-Sheikh Jarrah neighborhood since 1956 and their suffering started in 2008 with the expulsion measures.  During that time, lawyers of the affected families; Sami Irashayed and Saleh Abu Hussein checked the Land registration file and found flaws in it.  Thus, they filed a suitcase before the District Court asking to open discussion about the ownership of the land.  Lawyer Sami Irshayed said “they have adequate evidence proving that this land does not belong to settlement associations saying that the Israeli claims are based on Turkish birth certificates, but when you look into the registration file, you see no birth certificates.  Moreover, the Deputy Land Registrar wrote months before the registration of the land that the alleged birth certificates were not presented to him.   Despite all of this, within only one month the land was registered under the name of the associations.”  Moreover, Lawyer Irshayed traveled to the Ottoman Archive in Istanbul and checked the numbers of birth certificates which were mentioned in the registration file to find out that there were no certificates with such numbers.  He added that he found certificates relevant to lands owned by Jews in al-Sheikh Jarrah but do not match with the place description and boundaries of the land.  The District Court refused to hear the evidence on the basis that the statute of limitations has expired as the land was registered many years ago.  The lawyer headed to the Supreme Court and asked for examination of the evidence, but the Court after short discussion decided to reject Sabbagh’s appeal and approve the District Court’s decision on the statute of limitations.