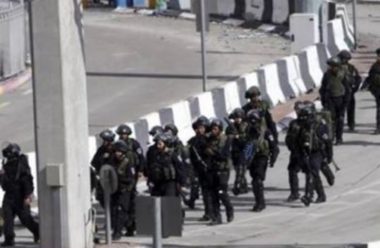 Dozens of soldiers, undercover forces, and personnel of the City Council, in occupied Jerusalem, invaded Shu’fat refugee camp, Thursday, and surrounded many areas, before storming and searching several buildings, and occupied their rooftops.

Media sources said the soldiers were also accompanied by bulldozers, and invaded many areas, especially the main road near the military roadblock at the entrance of the refugee camp, in addition to Ras Khamis and Shehada areas.

The soldiers also stopped and searched dozens of schoolchildren, in addition to several buses, and interrogated many Palestinians while inspecting their ID cards.

The invasion was carried out one day after the army demolished nineteen stores and shops, an issue which raised fears among the Palestinians of further destruction of property in the refugee camp.

The soldiers used bulldozers to remove the rubble of the demolished stores, after completely surrounding and isolating the refugee camp.

On Wednesday at night, the soldiers invaded many areas in the refugee camp, and fired live rounds, gas bombs and concussion grenades at local youngsters, who protested the invasion and hurled stones at the army vehicles.

Senior social and political leaders in occupied Jerusalem have warned that the escalating Israeli violations against Shu’fat refugee camp, are part of a wider policy arming at ending the work of the UNRWA there.