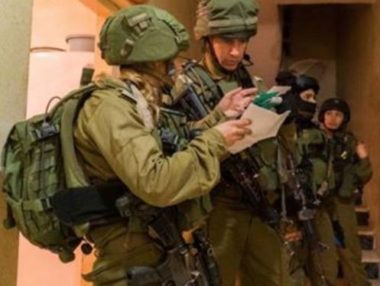 The Palestinian Prisoners’ Society (PPS) has reported that Israeli soldiers abducted, overnight until morning hours Thursday, 21 Palestinians from their homes, and illegally confiscated money from many homes, in several parts of the occupied West Bank.

In occupied Jerusalem, the soldiers abducted four young men, after stopping a car that was transporting them in Jabal al-Mokabber.

The PPS said the soldiers assaulted the four young Palestinian men while examining their ID cards, before abducting them.

They have been identified as Mohammad ‘Oweisat, Ahmad ‘Oweisat, Mo’tasem ‘Allan and Mo’taz ‘Allan; they were moved to an interrogation facility in the city.

In Hebron, in the southern part of the West Bank, the soldiers abducted a former political prisoner, identified as Saed Abdul-Raman Zama’ra, in addition to Yahia Issa Zama’ra, after storming their homes and ransacking them.

The soldiers also installed many roadblocks on roads leading to various cities, towns and refugee camps, in Hebron, before stopping and searching dozens of cars, and interrogated many Palestinians while inspecting their ID cards.

Eyewitnesses said the soldiers wired and detonated the doors of many homes in the town, before breaking into them.

Owners of three of the homes have been identified as Badran Kharouf, Riyad Majadba and Abdul-Khader Abu Sa’ada.

In Jenin, also in northern West Bank, the soldiers searched homes in Zabbouba town, west of the city, and abducted Ahmad Nasri Jaradat.

In Tubas, in northeastern West Bank, the soldiers abducted Firas Hasan Daraghma, after invading and searching his home, in addition to Ra’ed Daraghma and Assad Saleh Abu Arra, who were taken prisoner at the Za’tara military roadblock.

Furthermore, the soldiers searched many homes in the al-Khader town, south of the West Bank city of Bethlehem, and abducted the coordinator of the Popular Committee Against the Annexation Wall and Colonies, Ahmad Mahmoud Salah, 44, in addition to his brothers Ashraf and Emad; all are former political prisoners, in addition to Mohammad Ismael Mousa, 22.

In related news, the soldiers illegally confiscated thousands of Shekels from the homes of several political prisoners, after invading them, and alleged locating weapons during searches in Hebron Governorate, in southern West Bank.